'Bell and a Ball

Akron club gets a face-lift, still rocks something mighty. 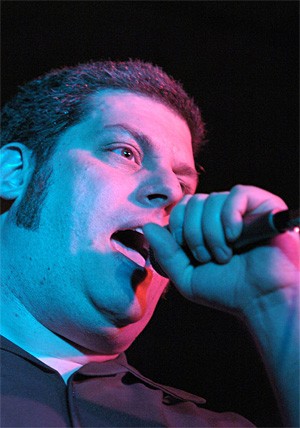 "We love Annabell's," says Suede Brothers frontman Dylan Francis. "The fact that it has no stage is my favorite part of it. You're right there in the crowd. The all-red lights add to the heat and the intensity of the show."

Former Whitechapel frontman Ben Childs once described the bar's lower-level performance area as "the Sarlacc pit from Return of the Jedi." The plumbing has been fixed, and the ceiling no longer leaks black sludge. The room also has a new sound system.

Booking is being handled by Brad Thorla, a former Lime Spider employee who drums for Sofa King Killer and Um . . . Force Field?

"It's always going to be a rock and roll dive bar, but I think it can be a rock and roll dive bar with a hint of class," says Thorla. "I want to make sure that people know that if they're nearly broke, they can still go to Annabell's and probably have some interesting, original entertainment. I see it like the humans retreating to Helm's Deep in the second Lord of the Rings. Lime Spider is done, so downtown has been officially abandoned to the Akron U. meat market and über-class."

Lords of the Highway, Road of Sin, and the Village Vandals play Friday, January 11.

• The 12th annual Tri-C High School Rock Off kicks off this week with two shows at House of Blues (308 Euclid Avenue). Rounds one and two take place at 4:30 p.m. Friday, January 11 and 4 p.m. Saturday, January 12. Tickets are available at the door and via Ticketmaster.

• Dead in London has posted a demo sampler from its upcoming album at www.myspace.com/deadinlondonrock.

• Timothy Smith's Mercury Project makes its live debut on Saturday, January 12, at the Phantasy Night Club (11802 Detroit Avenue). Smith has been on the scene since 1989, playing with bands like Nation of Teflon Souls, Lestat, and UV. The new Project features NASA transmissions set to minimal old-school techno beats. Listen at www.myspace.com/mercuryproject.

• Nighttown and 107.3-FM WNWV have launched a new radio program to showcase artists coming to the jazz hot spot. Host Daniel Steinberg plays tunes and chats up the bands. Listen every other Sunday from 9 to 10 p.m., or visit www.WNWV.com. The next show airs Sunday, January 13.

• Visit blogs.clevescene.com daily for breaking music news, new songs, video clips, and other online entertainment that will help you look busy at work.