by Cris Glaser and Fred Wright 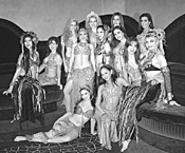 Miles Copeland knows talent when he sees it. After all, he helped guide the Police to multi-platinum glory. His latest venture, the Bellydance Superstars, is a troupe of American girls who practice the ancient art of swinging veils and shimmying midsections. And it all came to him by accident: He was managing an Arabic music group that needed some spice, so he added traditional dancers to the mix. "The next thing I know, everyone showed up to see the belly dancers," he says. He soon discovered a large, primarily female subculture in America that pledged allegiance to belly dancing. "It's the only dance form created by women for women. And men like it too," he says. "The whole thing is so crazy, but that's what's so fascinating about it. And anything that bridges cultures is good." The Bellydance Superstars perform at 8 p.m. Sunday at Peabody's Down Under, 2083 East 21st Street. Tickets are $15 to $18; call 216-776-9999. -- Fred Wright

Lisa Delissandro learned her '80s-speak, like, from her way-cool mother. The 21-year-old Cleveland Heights resident sums up Grid/Orbit's free Retro Fridays in three words: "It's totally bitchin'." Every week, vinyl spins of period classics from A Flock of Seagulls, Duran Duran, et al. fill the dance floor. It's aimed at twentysomethings -- gay and straight -- who are breathing new life into 20-year-old Brat Pack tunes. "That's what a lot of younger people are listening to," says the club's Matt Garson. Delissandro can relate. She inherited a stack of forgotten albums when her mother cleaned out a closet. "It's cool music," she says. "Everyone could sing and dance to it, and it kinda created a camaraderie." Retro Fridays is at 10:30 p.m. at the Grid/Orbit, 1437 St. Clair Avenue; call 216-623-0113. -- Cris Glaser

At her 10-year class reunion, an ex-wallflower remembers that "they used to call me Tiny Tits." That's one memory for the musical yearbook Is There Life After High School? The show features eight former classmates gathering to dish about divorce, cancer, and war -- as opposed to SAT tests, after-school detentions, and the prom dates that mattered so much a decade ago. The class clown sets the tone: "I had an erection the whole four years." It plays at Cassidy Theatre's Downunder Café, 6200 Pearl Road in Parma Heights through April 4. Show times are 8 p.m. Fridays and Saturdays and 3 p.m. Sundays. Tickets are $15; call 440-842-4600. -- Cris Glaser