With My Morning Jacket and Adam Green. Monday, August 12, at the Beachland Ballroom. 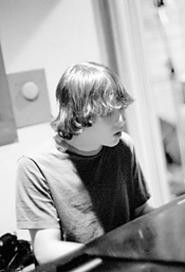 A natural-born romantic, Ben Kweller boasts a new album, Sha Sha, that bubbles over with the solfège of love -- the bop-bops, the do-do do-dos, and the ba-ba-ba-ba-ba-bas that give voice to the heart's joy and yearning. From piano ballads to acoustic pop to raved-up rockers, there's a spirited innocence on his album too often missing from rock. Like the Beatles singing "I Wanna Hold Your Hand," Kweller taps the sunny rambunctiousness of his youth (he's barely old enough to drink). "We can't let it change, our lives can braid," he sings on "Make It Up," acknowledging that "we're constantly afraid." But that's just what it is, Kweller says, and despite it, "There's people meeting on Mars and people crashing in their cars and kids are kissing under the stars." Kweller's moptop optimism leans on his hard-earned resilience and echoes like a clarion call with the recognition that anger, frustration, and despair are backward-looking emotions, while love and hope turn our ass to the past and our face to the future. Let's hope pop music follows that lead.