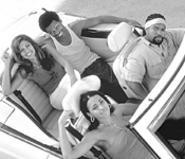 Before the opening credits of All About the Benjamins have rolled, we've seen Ice Cube clothesline a girl in a bikini and repeatedly zap a redneck in the testicles even after he's been subdued. Not half an hour later, Cube's calling his Middle Eastern boss "ragtop son of a bitch" and pointing a gun at a child. Moments after that, he's torturing a helpless foe by drilling metal screws into the man's bloody forearm. Flawed heroes are all well and good, but it's hard to root for such an utter bastard -- especially when his only motivation is to get hold of diamonds that were never rightfully his to begin with.

Cube, playing bounty hunter Bucum (pronounced, appropriately, "book 'em"), seems to be counting on his star charisma to get viewers on his side. Think about it: The man once known for rapping about hurling profanities at police, threatening Korean grocery store owners, and referring to white folks as snakes and devils assumes he'll be inherently likable. It's no better a performance than one would expect from a musician, except that Cube has Three Kings and Boyz N the Hood under his belt, so we know he can do better.

Bucum desperately needs some money, because he doesn't like having to work for a boss who, you know, tells him what to do and stuff. He's trying to go into business for himself as a private investigator, but he's stuck with low-paying assignments, such as pursuing small-time hustler Reggie Wright (Mike Epps). Wright's general M.O. is to rip off convenience stores with the help of two foul-mouthed old ladies, who say things like "You still talkin' shit, bitch?" as a way of getting cheap laughs.

In an extremely unlikely coincidence, Wright wins the lottery on the same day he accidentally stumbles upon a diamond heist, only to then leave the winning ticket in the jewel thieves' van. Promptly caught by Bucum, who's upset that the thieves shot at him while he was trying to grab Wright, the con man persuades his captor to help him get the diamonds and the lottery ticket by pursuing the bad guys. Or something like that.

What follows is a bunch of poorly choreographed chases whose ineptness director Kevin Bray tries to disguise with every trick in the book. The film's fast-paced enough that most probably won't think to look at their watches, but not quite quick enough to gloss over plot problems. When not extrapolating huge chunks of exposition from nothing, Cube and Epps are stumped by setups so obvious, you'll be 10 steps ahead of them. Ultimately, All About the Benjamins plays like a knockoff of Michael Bay's already derivative and much more fun Bad Boys, only with even less plot.