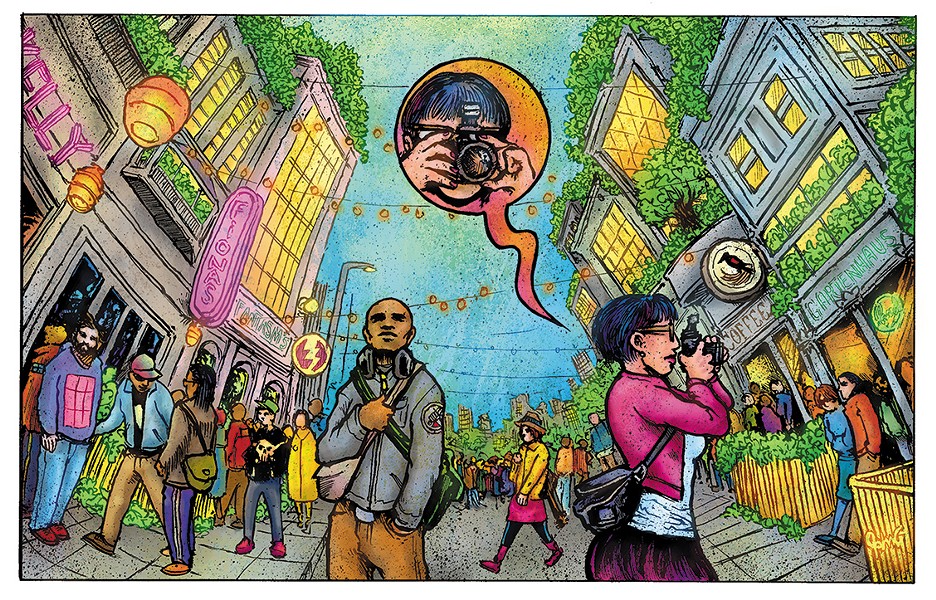 It's been more than 25 years since the Boston native settled in on Cleveland's airwaves, and in that time Donovan has earned his reputation for straight-talking sportscasts and spine-tinglingly bonkers play-by-play. The longtime sports director for Channel 3, Donovan has served as the voice of the Cleveland Browns since 1999, stepping into a role previously held by the legendary Nev Chandler and quickly making it entirely his own. If only he had a better team to cover, his calls would be every bit as legendary.

The ever-classy Romona Robinson holds down the news desk at WKYC, but she had help here from an avalanche of votes for her weekday-morning counterparts. Mark Nolan and Hollie Strano, the twin gluttons for punishment who host the early show beginning each day at 4:30 (that's a.m.!), turned the tide in favor of Channel 3. Not sure whether anyone's actually watching at that hour, but readers seem to appreciate knowing that they could.

For those who didn't experience the Flats' entertainment heyday in the late 1980s and early 1990s, the tales of packed bars and day-and-night partying could be mistaken for the stuff of lore. But as the East Bank continues to crumble, the West Bank is percolating with activity — most notably the Improv comedy club's move to fresh new digs and the aquarium that will be tanked in the Powerhouse. Mighty visions abound for the East Bank too, giving reason to believe it's only a matter of time before the true stories of the Flats once again become the stuff of legend.

Maybe it's the resurgence of downtown that returned our collective attention to the venerable monument at the center of it all. It was the second-tallest building in America at the time of its completion in 1928; and while it's no longer even the tallest building in its own home, the Terminal Tower's architectural grandeur has yet to be matched. It's perfectly fitting that the future casino of Cleveland's dreams will flank the skyscraper that birthed all our dreams.

There's a new energy coursing through Cleveland's western neighbor these days. It's an energy derived from residents young and old who share a determination to celebrate their city's countless virtues. Nowhere in Northeast Ohio do so many cultures mesh so harmoniously as they do in Lakewood. It's the perfect gathering place thanks in no small part to its wonderful restaurants, its rollicking bars and clubs, and its quirky small businesses that line every major street. And it's the perfect home thanks to its bountiful and hardy old houses and apartments, for its overachieving schools, its bucolic parks, and its pervasive sense of neighborhood pride and unity.

A welcome splash of modernity in vintage Little Italy, the townhomes of 27 Coltman are beloved for their amenities and their convenience to all the bustle and excitement from University Circle to Coventry. Beginning at $327,000, each luxury home boasts a gourmet kitchen and master bath, and incorporates state-of-the-art energy-efficiency technology throughout. Just as enticing: The heavenly smells wafting in from Murray Hill's eateries don't cost you a penny.

We've learned about his penchant for favors and whores. But the main event surely awaits us: While disgraced Auditor Frank Russo quietly took his medicine from the Feds last year, our former Cuyahoga County commissioner, Democratic Party boss, and all-around skeevy guy has chosen to fight the corruption charges against him in court. That means more golden TV moments, more outrageous sound bites, and quite a few more thousand taxpayer dollars squeezed from you on Jimmy's time. Don't forget to enjoy it!

Coming to a federal courtroom near you in September.

He's the little guy who's out to stick it to the big guy, and we've all been cheering for that since our first Tom & Jerry cartoon. A consummate cage-rattler, Kucinich is fearless when it comes to championing the causes most dear to his constituents, from his anti-war initiatives to his crusades for social justice that catch the eye of all of liberal America. It's good for publicity, and even better come election season.

There's a lot less of him to love these days, but a slimmed-down Drew is still fat with pride for his forever hometown. He put our Polish beer halls on the map with The Drew Carey Show; now he's wrestled the skinny mic from legendary Bob Barker on The Price Is Right, injecting new energy into the world's best game show. Drew has long been a Hollywood star, but his heart still belongs to Cleveland. And Clevelanders, of course, are still quick to return the love.

If this particular category lacks an air of suspense, the winner's novels more than compensate. Long regarded as a literary all-star, Roberts made his bones in Hollywood, of all places — as producer for the original Hollywood Squares and classic comedies from Andy Griffith to The Lucy Show. But it's his series of mysteries revolving around Cleveland everyman Milan Jacovich that have endeared Roberts to the thousands of readers who hang on his every word. With novel names like Pepper Pike, Collision Bend, and A Shoot in Cleveland, there's no mystery as to where Roberts' heart lies either.