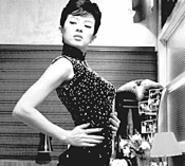 Cineastes swooned over Hong Kong director Wong Kar Wai's 2000 film In the Mood for Love, a slow-as-molasses melodrama about two tediously formal people whose spouses are having an affair with one another. Thrown together by circumstances, they find themselves falling in love but, determined not to emulate their cheating partners, decide to keep the relationship chaste. The film is all mournful music, unspoken words, slow-motion cinematography, yearning expressions, and sad resignation. And it is boring.

Four years in the making, 2046, Wong's follow-up to In the Mood for Love, is a film worth seeing. Yes, it would be helpful to have seen -- or at least to know about -- the first film, since the sequel provides no backstory, but it isn't absolutely essential. Astute viewers will pick up what is going on: A sad-eyed but rather heartless cad seduces a string of women but can't fall in love with any of them, because his own heart was broken by the one woman who rejected him.

The cad is portrayed by the deceptively subtle but always convincing Tony Leung Chiu Wai, who played the heartsick lover in In the Mood for Love. (Wong's favorite alter ego, Leung gave the first film what little true poignancy it had.) He again plays Chow Mo Wan, the former newspaperman who now writes seedy, soft-porn dime-store novels.

Although it opens with an elaborate light rail system snaking its way through a futuristic cityscape, the film does not take place in the year 2046. The sophisticated CGI locale is actually the setting for one of Chow's sci-fi-tinged novellas, and the movie occasionally returns to the imaginary place and its characters. The title refers to the hotel-room number where the illicit non-affair took place in the first film. It also happens to be the year of Hong Kong's final "integration" into China.

The action begins in 1966, not long after the previous film ended. Chow is returning to Hong Kong from Shanghai, where he moved at the end of the last picture. His new paramours include an old flame, Lulu (Carina Lau Kaling); Su Li Zhen (Gong Li of Raise the Red Lantern and Temptress Moon), a mysterious woman who always wears one black glove; his landlord's eldest daughter, Jing (Faye Wong); and Bai Ling (Ziyi Zhang of House of Flying Daggers and Crouching Tiger, Hidden Dragon), a prostitute who falls hopelessly in love with Chow -- feelings he does not reciprocate.

If the first film was about longing and unrequited -- or, at least, unconsummated -- love, 2046 is about longing, memory, and the effects of heartbreak. It's stunning to look at (both films were shot by cinematographer Christopher Doyle, although 2046 used two additional directors of photography). Color, composition, and framing play as important a role in storytelling as does dialogue or plot. The lighting is moody and exquisite. Camera angles and the spare but effective use of slow motion are striking.

Love takes two forms in this haunted landscape of the human heart: pain and memory. Lulu weeps over her long-dead true love; Su Li Zhen has the same name as the woman who rejected Chow; Jing's father forbids her to see her Japanese lover; Bai Ling is all but buried alive by her grief.

Chow's saving grace (intentional or not) is that he never appears evil or even malevolent. He's isn't cold as much as emotionally distant. And he is pretty up-front with his lovers about his intentions, although that doesn't prevent some of them from hoping for more. Not only does he seem perpetually in pain, but he reveals an unexpected sympathy for Bai Ling, perhaps recognizing in her a reflection of his own broken heart.

The actors are uniformly solid. Leung retains the poignancy that characterized his performance in In the Mood for Love, even if his thin mustache and slicked-back hair give him the aura of a smarmy roué. Zhang's mesmerizing beauty threatens to blind audiences to her talent, a "handicap" that likewise afflicted Gong Li in her early days onscreen. Both are fine actresses; Zhang is particularly effective here, in one of her most multidimensional roles. Equally good is Faye Wong as the landlord's eldest daughter, whose filial loyalty almost costs her a lifetime of happiness.

Although this is not a view shared by many film critics, to this reviewer, several of Wong Kar Wai's earlier films play like feature-length perfume commercials -- slow-paced, lifeless, and extremely pretentious. His latest doesn't fall into that trap. It's the best thing Wong has done in years -- perhaps ever.