Mission of Burma makes up for lost time. 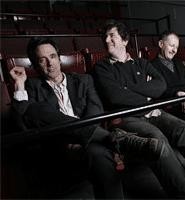 Fate has been a lot kinder to Mission of Burma the second time around.

Largely ignored during its initial four-year run from 1979-'83, the band -- with its aggro mix of post-punk, art rock, and the avant-garde, not to mention its sound-barrier-breaking live gigs -- was still being branded "ahead of its time" almost two decades after its demise.

This time around, however, an indie world in the throes of a post-punk revival has embraced the Mission, Mach II.

"We're like some little bubble floating around -- we're not really attached to the regular timeline," says guitarist Roger Miller. "We folded before our time. It seems to be our time now."

There was an understandable but unjust aura of nostalgia surrounding the release of OnOffOn, but with The Obliterati, Matador, Burma's label, was confident enough to make only passing mention of the band's first incarnation and historic status. The record's title is a word of Miller's invention, inspired by lines from Dylan's "Desolation Row" and meant to suggest the opposite of "illuminati."

The Obliterati also reflects Burma's on-going evolution. Miller says that each songwriter has become adept in the others' "territories," blurring the lines between them and keeping things fresh. Though Miller is known more for his avant-garde leanings, he's become just as adept at penning the sunnier melodies ("Donna Sumeria") and anthemic rockers ("1001 Dreams") that were once the sole purview of Conley. Meanwhile, songs like "Nancy Reagan's Head" and "Good, Not Great" show that Conley's range has grown as well, adding a humorous touch unthinkable in early Burma. Prescott's instrumental, "The Mute Speaks Out," suggests yet another novel direction.

In any case, reaction to The Obliterati and OnOffOn makes for a stark contrast with the band's early years. Burma's '81 EP, Signals, Calls & Marches, and its first full-length, '82's Vs. (both released on Boston's independent Ace of Hearts label), provided templates for much of the college and indie rock that followed. Unfortunately, their records predated the network of college radio stations, small labels, independent publicists, and mom-and-pop retailers that sprang up shortly after the band's demise and made it possible for Burma's peers and progeny -- from Hüsker Dü to fellow Beantowners the Pixies -- to survive and sometimes even thrive.

At the time, however, releasing records on independent labels was akin to dropping them into a black hole, as Prescott told a recent interviewer. Though the band drew decent numbers in its hometown, New York, and Washington, D.C., radio play and sales in the rest of the country were nearly nonexistent. Frustration with that lack of support, combined with Miller's worsening tinnitus, led Burma to pull the plug.

"We didn't get that critical thing, where by the third album people start to catch on," Miller says. "We only had an album and a half out; then we were gone."

Gone, but not forgotten. In the years that followed, the band's stature slowly grew to reflect the excellence of its small but seminal recording output. Burma was name-checked or covered by former contemporaries like Sonic Youth and R.E.M. in the '80s, and in the following decade by Nirvana, Moby, Blur, and Yo La Tengo (whose first record Conley had produced).

If there was a tipping point, it may have been Burma's inclusion in Michael Azerrad's 2001 collection of essays, Our Band Could Be Your Life: Scenes From the American Indie Underground 1981-1991.

"We probably sold like one-tenth the amount of any other band in that book," laughs Miller, who was "totally honored" to be included among the Minutemen, Sonic Youth, Big Black, and Fugazi. "We felt like it was justified that we were in there, but we never expected it. We were tickled pink."

Azerrad's book also turned up the heat on the notion of a reunion -- though not among the band members themselves, Miller cautions. But after Miller and Conley joined Prescott's short-lived the Peer Group onstage, opening for a 2000 Wire show in New York (the first time they'd all played together since Burma's farewell tour in '83) the reunion talk reached critical mass.

"People asked, 'So does this mean there'll be a reunion?' And we said, 'Heck, no,'" Miller says. "Of course, within a year we'd reformed. There was a pull to make us do it, and we decided not to resist it anymore."

What helped make the reunion reality was that after the Peer Group gig, Conley, who'd quit music altogether to raise a family and work at a Boston TV station, was inspired to begin writing music again, forming the band Consonant with ex-members of Come and Silkworm, Chris Brokaw and Matt Kadane, in 2001.

It was a precondition of any Burma reunion that the band would have new material, says Miller. "If we were going to be a band again, we had to be a living band, which means that we would write stuff."

The new material, which would eventually compose OnOffOn (an appropriate record title if ever there was one), convinced Burma to stage a pair of reunion shows in early 2002. The group felt that the time was right, in part because Reagan's '80s seemed to have so many overtones with the new Bush years -- what Miller calls "a psychic connection."

But as OnOffOn and The Obliterati prove, this reunion is no nostalgia trip. And while the two-decade layoff may have sucked for Burma faithful, in the long run it produced an even better, more flexible band. Certainly, for Burma, time has made all the difference.

"Things are much easier," Miller says, citing better crowds, venues, transportation, lodging, and paychecks. "We're older, too; in those days, Mission of Burma was our life. Everything else was secondary, whereas now we all have other things that we do. But we've got this thing, and when it's Mission of Burma, we put everything we've got into it. When we do a show, it's every bit as full-throttle as it ever was. We take it just as seriously -- but we don't take ourselves as seriously."