Between Broken Spindles and the Faint, Joel Petersen is a busy guy these days 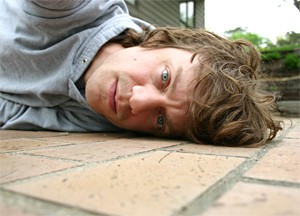 It's a sunny Saturday afternoon in America's heartland, but Joel Petersen sounds a little bushed. Then again, living a double life will do that to you.

As the bassist for Omaha dance-rockers the Faint, as well as the brains behind his own electronic project, Broken Spindles, Petersen has essentially been living in the recording studio for the past year. His hard work is just now beginning to pay off, as both Broken Spindles and the Faint are preparing to end several years of relative silence with high-profile returns.

This spring, within a one-month window, Petersen has already self-released a limited-edition Broken Spindles record, finished recording an album with the Faint, and started the mastering process on the next official Broken Spindles release, due later this year.

Let's start with Broken Spindles' Document Number One, a highly cinematic instrumental work recently released on Petersen's Kaput Pin label. "I wanted it to be a more personal kind of release — limited edition, silk-screened, and hand-numbered," he says. "It needed to be on a smaller scale, without going through all the usual business channels."

It also shouldn't be construed as a proper follow-up to Broken Spindles' 2005 album, Inside/Absent, says Petersen. "By giving it that title, I was trying to make it clear that this was something separate from the other releases," he explains. "[Document] was really about exploring the instrumental side of stuff, which I hadn't done. It started off as score music to a friend's film I was working on. I took some of those ideas and made them into pieces of music I thought could stand on their own, without visuals."

The result is a record that's far more mellow and ethereal than most Broken Spindles albums — which tend to be crunchier concoctions of electronic loops and beats, circling around organic guitar and piano lines. Petersen's breathy vocals and unconventionally confessional lyrics are also noticeably missing on Document.

Apparently, though, everything will be back in its right place on Kiss/Kick, the even newer Broken Spindles album that's slated for release in a few months on Bright Eyes' Omaha-based Saddle Creek label. "It's more in the tradition of my normal albums," says Petersen. "It's got vocals, and there are traditional rock instruments in there, as opposed to the more orchestral sounds. I think overall it's actually more of a straight-up rock record than anything I've done before."

Petersen is a tad more mum when it comes to the Faint's latest. Tentatively titled Fascination, it's the band's first studio release since 2004's Wet From Birth. Petersen says the CD should be in stores by early August and that the band is trying some "new things" this time around. But he won't go into details.

Unlike the computer-based, one-man-band aesthetic behind Broken Spindles, the Faint takes on a more group-like and democratic approach in the studio. That's one of the reasons Petersen formed Broken Spindles — "Just [so] I can work on things outside the confines of a five-person band," he says. "It's almost a necessity to have that difference. It's harder on your own, and it moves a lot slower. But it's been a great outlet for me, just to get ideas going and keep my creative juices flowing."

While the Faint is often referred to as a retro band — mostly because of the throwback new wave it plays — Broken Spindles' electro-rock is often tagged as "futuristic" music. Petersen says he doesn't really agree with the label. "But I don't disagree with it either," he says. "There are some bands you hear, and you think, 'They're trying to be T. Rex.' There's nothing like that [here] — where I can just point to something from the past and say, 'Oh, there's Broken Spindles.'"

The Spindles' album covers — all of which feature a faceless white figure standing in an ultra-modern domestic setting — add to the 2001: A Space Odyssey vibe. "It's actually based on something I did in a college pottery class," laughs Petersen. "I was awful. I couldn't make a pot or a mug to save my life. But years later, there was something about these figurines I made that just seemed to fit with what I was doing with my music."

Petersen is now ready to hit the road with an expanded Broken Spindles. He says the tour is a reaction to all the time he's spent recording various albums over the past couple of years. "After going into the studio every day and being sort of meticulous about everything, I just wanted something the opposite of that," he says. "The show is about taking the songs and interpreting them with a freer spirit. There's nothing prerecorded or sequenced. It's all just live manipulations of things that happen in real time. I wanted to react to music instead of studying it."