Beyond Priest, Beyond Earth 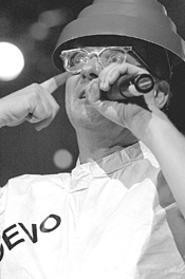 Tim "Ripper" Owens made a worldwide name for himself as Rob Halford's replacement in Judas Priest. Then he became a permanent figure in the metal community by joining Iced Earth. And now his own band has landed a record deal. Stocked with Cleveland veterans, Owens' Beyond Fear has signed with SPV, a sizable independent metalworks with offices in Germany and New Jersey. SPV's roster includes Type O Negative, Sepultura, and Iced Earth, among others.

"We have a steady relationship with Tim," says SPV Promotions Director Jon Paris. "As my boss says, he's one of the top five singers in heavy metal. Their guitarist is absolutely phenomenal. You've got some really heavy, aggressive, modern music over classic metal vocals, and that's winning stuff."

Legendary Florida metal producer Jim Morris (Iced Earth, Death) will be in the area soon to start recording the band's debut at Lakewood's Lava Room Recording and Akron's Neon Cactus Studios. The as-yet-untitled album is slated for a 2006 release, which will be followed by touring. But Beyond Fear won't wait to introduce itself. The group just played Spain's Metalway festival to a crowd of more than 15,000, between sets by Accept, Korn, and Motörhead. The group will spend September playing shows with Savatage side projects Chris Caffery's Faces and Jon Oliva's Pain.

Owens says that he plans to continue with Iced Earth, whose Glorious Burden met a warm critical reception and has sold more than 70,000 copies.

"I can make both bands my main band," Owens says. "Iced Earth always seems to have a decent amount of downtime, so Beyond Fear is going to work around their schedule. I plan to take the band as far as I can. SPV are good people. They're going to push it -- that's nice."

· Swim is no more. After being contacted by another group that had the name Swim first, the Cleveland melodic-rock band has changed its moniker to the View From Everest. The group just finished recording an album, with Magna Fi frontman Mike Szuter producing. Catch the View on Friday, August 26, at the Hi-Fi Club (11729 Detroit Avenue, Lakewood).

· Former members of hard-rockers Bedroom All-Stars have formed the funky, hard, and political Enemy for a Day. The band plays the XMG Music Festival on Wednesday, August 24, at the Hard Rock Café (230 Huron Road), followed by a set at the Hi-Fi on Saturday, August 27.

· Beginning in September, Kent's Outpost (4962 State Route 43) plans to regularly host local and national bands of all stripes. Interested bands can contact the club at 330-431-3711.