Soul, jazz, and funk get a workout when Mary Bridget Davies takes the stage. 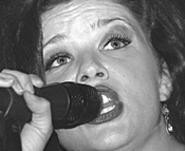 The jazz-blues club 2527 is the kind of place that would feel completely unrealistic in a sitcom. At the small candlelit bar on the border of Tremont and Ohio City, everybody knows everybody else, and patrons wave at new arrivals from the other side of the room, greeting them by name. The Mary Bridget Davies Group is playing tonight, and the band has brought out a crowd ranging in age from their 20s to 60s, with a couple of tattoo sleeves visible amid the polo shirts, cocktail dresses, and sweaters.

In one corner, a picture of Ella Fitzgerald hangs on the wall, the icon singing to a small crowd from a stage no bigger than the one underneath the photo. A red-and-black drum kit fills most of the performance area, so frontwoman Davies will soon have no choice but to take over the room, serving as singer, hostess, and mistress of ceremonies. For now, though, she's getting ready at the end of the bar, vibing as the band takes the stage without her, opening with two instrumentals.

Dressed in black, her brunette hair teased out, Davies beams, her big white smile rimmed with bright-red lipstick. A silver ring catches the light, a glittering bracelet coils around a wrist. In the dimly lit room, guitarist Marc Greenwald works his way around the fretboard in measured bursts. The band rotates in and out of the spotlight, playing slow solos, gradually increasing the tempo. When Davies takes the stage, she claps her hands, shakes her hips, and nods her head from the first note. On Freddie King's "I Ain't Got Nobody" and Jimmy Reed's "Baby, What Do You Want Me to Do?", she closes her eyes and sings like a young Aretha, begging for affection, offering to love you better.

By midnight, 2527 is standing-room-only, and most of the place is a bustling dance floor. Davies steps offstage and dances in the crowd during instrumentals. A rendition of Stevie Wonder's "Superstition" gets the room shuffling, swinging, dipping, and twisting. It's not like a rock show. It's not like the rock life.

"There's a real scene for the blues," Davies explains later, making each gesture large enough to see all the way across the club. "People will go see [Cleveland roots rockers] Rosavelt at the Beachland with three other bands on a Tuesday night, and the band will get a part of the door. We play smaller bars, we almost always play weekends, and we almost never work for the door."

The economic conventions of the blues make it easier when the band is working the outer limits of its slowly growing territory. Playing smaller bars more frequently, for a guaranteed payout, helps prevent the survival struggles that most rock bands face. The group plays between 4 and 16 shows a month at a handful of Cleveland clubs like Stamper's and Wilbert's, and occasionally reaches as far as the Blues Station in Columbus. To ensure a draw, they might trade shows with a compatible group, such as Columbus's Pat McLaughlin Band. Swapping shows is fairly common in the rock world, but even more so in blues.

"Blues is a lot more familial," says Davies, noting that petty everyday rock squabbles aren't a factor in the blues scene. Bands don't bicker about who gets the longest set. "It's not more adult; it's more childish -- childish like 'I have a sandwich; are you hungry, too?' We're happy to share."

The Mary Bridget Davies Group, in fact, is family: Davies is married to her bassist, Adam Constantine. They met at a jam night at the festive downtown blues spot Fat Fish Blue. She was too nervous to perform, and they didn't hit it off; three years later, they bumped into each other at the Savannah. By then she had developed confidence and chops. While attending Bowling Green, she loaded trucks at UPS to fund school and trips to Cleveland to attend jam nights and work with the improv group Cabaret Dada. A dancer since age three, she toured the country with renowned choreographer Tina Landen (who taught Janet Jackson) and now teaches dance by day before taking the stage at night.

Davies and her young white bandmates look too clean to play the blues this well, but they have a pedigree. Davies's father, whom she greets midsong as he walks into the bar tonight, is Brian Davies, lead singer for '70s Cleveland rockers Labrynth. Constantine has played with Colin Dussault and Sonny PC Williams's Blues Explosion. Alto saxophonist Ethan "Top Shelf Rocks" Sheils is equally comfortable playing the blues or Beethoven. Drummer Dan Jankowski is the son of Cleveland music legend Russell Jankowski, who played in the Tree Stumps. Trumpet player Don Day cut his teeth in the Uptown Funk All-Stars.

The group's sole member closer to 40 than 30, guitarist Greenwald grew from punk to blues, studying with Michael Bay and Austin "Walkin' Cane" Charanghat. He saw Davies perform at a Parkview jam night and immediately knew he wanted to play with her. Two years later, the two write the group's original material together. Their live shows are developing a following, but the music also works as pure audio; soon, they hope to record an album of their own songs.

"One of the most difficult things I've found in playing music is finding people who want to do their homework, to play, to work together," says Greenwald. "But we have all that here. I think if we continue the way we've started, enough people are really going to like it."

"We play the blues, but not front-porch blues, with a guitar and a harmonica," says Davies. "It's a total cliché, but we're a potpourri. We're R&B -- rhythm and blues. And soul. And jazz."

Hence the name change. Previously known as the mellifluous Blues on Purpose, the group recently rechristened itself the Mary Bridget Davies Group -- not the result of a lead-singer ego trip, but of expert advice. At this year's International Blues Challenge in Memphis -- the Super Bowl of blues -- renowned guitarist Vasti Jackson suggested that the word "blues" in the title would limit their prospects. Blues on Purpose made it to the semifinals nonetheless.

"We're into the game," says Davies. "Blues fans are dedicated. And to be accepted by that caliber of fans and musicians -- to me, that's making it."