The Nativity Story offers the colorized version of Christ's birth. 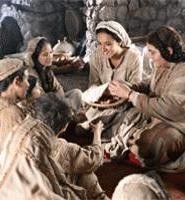 No, the Virgin Mary doesn't get high on aerosol fumes, and Joseph doesn't ride in on a skateboard, but in most other respects, The Nativity Story is less of a departure for Thirteen and Lords of Dogtown director Catherine Hardwicke than you might have imagined.

From our first glimpse of Nazareth teenagers making goo-goo eyes at one another while going about their chores, Hardwicke wants us to know that she's making her third film in a row about the difficulties of adolescence, whether the time is now or B.C. And when young Mary (Whale Rider's Keisha Castle-Hughes) comes to her parents in the first stages of pregnancy, it's clear that underage moms having babies out of wedlock was no more fashionable back then than it is today -- even if the father happened to be The Father. You try convincing Mom and Dad of that.

Little moments like those are Hardwicke's way of making The Nativity Story seem less ossified for a contemporary (read: young) audience than the Hollywood religious epics of yesteryear, and she tries to put her mark on the material in other ways too. Taking her cue from such post-neorealist Italian directors like Pier Paolo Pasolini and Ermanno Olmi (whose Cammina. cammina remains the greatest screen version of the Nativity that I know of), Hardwicke downplays mysticism and spectacle in favor of a more earthy view of how life may have been lived two millennia ago. Even when the archangel Gabriel appears in visions to Mary and Joseph, he seems less like a special effect than, you know, some guy who just happens to be standing there.

Hardwicke's most radical conceit, however -- at least for a movie positioned as a red-state holiday perennial (there is already a soundtrack album featuring "Christian & Country artists" performing "Christmas favorites inspired by the film") -- is that most of the major roles are acted by performers of Algerian, Iranian, Israeli, and Sudanese descent. Castle-Hughes is Maori, and the powerful young actor Oscar Isaac, who plays Joseph, is Guatemalan. Another actress, Hiam Abbass (who plays Mary' s mother, Anna), was actually born in Nazareth.

In short: Their skin is dark, which makes The Nativity Story the first Hollywood religious picture in memory (if not ever) to imply, for most of its running time, that Jesus Christ probably looked more like Jim Brown than Jim Caviezel. Until, that is, the newborn Lord makes his cameo appearance at the end, bearing a decidedly milky complexion.

Still, The Nativity Story does only so much to enliven a drama that has been playing out in Sunday schools and on suburban lawns for centuries, and which Monty Python neatly consigned to the pre-credits sequence of Life of Brian. Hardwicke, who began her career as a production designer, has a wonderful eye for detail -- possibly too wonderful, for there are so many shots of Nazareth villagers making artisanal cheeses that the movie may become uncomfortable for the lactose-intolerant. Would that she brought the same intimacy to her handling of animate objects.

There are a few quietly affecting scenes here, in which we see Mary and Joseph as the terribly frightened newlyweds they probably were, unsure of what to make of their extraordinary circumstances. But too often, the actors register as little more than set dressing, and despite Hardwicke's resolve to give us the real Nativity, as we've never seen it before, much of the movie smacks of convention -- from the three wise men being played for comic effect to the thunderous drumbeats that portend each arrival of the shekel-hungry Roman soldiers to the CGI-darkened skies that precede King Herod's slaughter of the innocents. Finally, the stars align. A shaft of heavenly light pours down upon the earth. The audience lets out a collective yawn.