A good idea grows up into a missed opportunity. 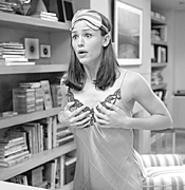 I am going to give 13 Going on 30 too much credit, though it's hardly worth the effort; Lord knows, the filmmakers didn't put much into it. It's a shame, as far as these things go, because what could have been an engaging, maybe even enlightening story about the unfairly high price a woman pays for conducting herself like a man winds up as nothing more than worthless, harmless, and ultimately charmless piffle. Even accidentally, it might have stood up as a subversive fable, because until its final moments, when it just seems to surrender to the obvious and inevitable for want of any better solution, the movie allows room for interpretation. But studio films, even those made by directors whose previous works have engendered a modicum of faith and goodwill, usually aren't about anything, except the pimping of empty, feel-good fantasies and ascending movie stars who fill the big screen with a whole lot of nothing. To that extent, wow, 13 Going on 30 is awesome.

It opens in 1987, with a 13-year-old girl named Jenna Rink (Christa B. Allen) parading around her room with a stuffed bra and a women's magazine opened to the article on how to be "30 and flirty." Jenna dreams of being popular with the high school's in-crowd, but is saddled with her flat chest, flat hair, and a nebbishy male friend, Matt (Sean Marquette), who builds her model dream houses, covers her with "wishing dust," and serenades her with songs played on his Casio keys. But after being humiliated by the cool kids at her birthday party, Jenna tells Matt to go to hell; she's had enough of his kind of sickly-sweet nice. Off she goes to bed, only to awake in a Manhattan apartment and in the body of Alias's Jennifer Garner. Needless to say, confusion and wackiness ensue, as Jenna discovers a nude man in her shower and a car waiting downstairs to take her to her job as an editor of the very same women's magazine she used to adore as a kid.

On the surface, the movie sounds very much like a modern-day variant of those 1980s fairy tales in which a kid finds himself in the body of Dudley Moore, Judge Reinhold, or Tom Hanks, and grows up just enough to realize that adults are cruel, manipulative, and unworthy of adulation or emulation. This is Big writ small, to the point of vanishing; 13 Going on 30 even has its own musical number, but instead of Tom Hanks and Robert Loggia dancing on life-sized piano keys, Garner corrals a nightclub of disaffected New Yorkers into reenacting the "Thriller" video. But Garner is no Hanks; if he was playing too young (more 8 than 13), she's playing too old. You can see her acting, like a teacher trying to attract and distract a 5th-grade class, and it's not something to stare at for long. Far better is Mark Ruffalo as the grown-up Matt, who's morphed into a good-looking guy, but still carries himself like a kid waiting for the bully to push him into a locker. There's an endearing tentativeness in his performance, especially when he confronts Jenna about how cruel she was to him when they were children.

The concept could have been intriguing, if only because Jenna, unlike Big's Josh, doesn't suddenly become, well, big. She's just missing 17 years of her life -- and, as we discover, they were 17 years that turned a buoyant, charming girl into a rather miserable and unlikable woman. Jenna is now best friend and colleague of the girl who tormented her in high school, Lucy, played as an adult by Judy Greer, whose face is perpetually twisted into a condescending sneer. Jenna has stopped speaking to her parents, alienated all her childhood friends, betrayed her boss to the point of nearly ruining her beloved magazine, and screwed a co-worker's husband in her office on countless occasions. Needless to say, she's appalled by each new revelation; Jenna can't believe she's a grown-up -- especially such a horrible one.

This is where it could have been so good, and this is how it goes so wrong. The movie gives Jenna a chance at a do-over, even though her mother (Kathy Baker, in what is less a role than an afterthought) tells her there's no such thing. 13 Going on 30 might have been so worthwhile, had the filmmakers -- director Gary Winick (Tadpole) and writers Cathy Yuspa and Josh Goldsmith (What Women Want) -- decided to strip the magic dust out of their fairy tale and cover it instead in the emotional grunge of real life. What if Jenna hadn't magically grown up, but instead had suffered a psychotic break upon realizing that she could no longer be the very kind of woman her magazine sells to impressionable 13-year-old girls? It may have been downright transgressive for a Hollywood movie to doll up a grim story as fantasy, but instead, the movie cops out, with its final sprinkling of magic dust and coating of pink paint. Can we get a do-over?