Those who toy with eating at Dottie's don't mind the occasional mishaps. 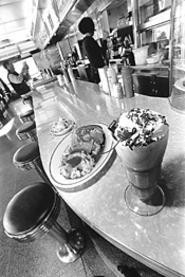 Three out of four famished East Siders recommend Dottie's to diners who dig fun. But beware of the fourth. She's the wild-eyed, sputtering brunette we spotted on a recent Saturday morning, stomping toward the door after a hungry thirty-minute wait for a breakfast that never came.

Unfortunately, even two months after it first opened, that's the way things go at Dottie's: mostly swimmingly, with the occasional major screw-up, as hostesses, servers, and the kitchen staff scramble to keep up with the demands of long business hours, a huge menu, and relentless crowds. For most customers, the little irritations -- the inevitable 10-minute wait; the sandwich that is almost gone by the time the soup shows up; or the dirty dishes that pile up on the table -- are outweighed by the heaping plates of tasty comfort food and equally retro prices. But the big inconveniences -- finding that one's party was crossed off the waiting list without ever being called, say, or never getting any food at all -- are harder to accept and create hassles for customers and staffers alike.

"Is the kitchen understaffed today?" we asked our Saturday-morning waitress after waiting 20 minutes for a table in one of the two half-empty dining cars.

"Yes, they are understaffed," she growled, obviously exasperated. "That, and they are just plain slow."

Dottie's owner, first-time restaurateur Steve Presser, says he is well aware of the frequent service lapses and is working on improvements. As a result, when things go well, as they do most often, visiting Dottie's Diner is one heck of a good time. Bright, colorful, and outfitted with enough 1950s paraphernalia to fully furnish the Cleavers' rec room, the cheerful restaurant is built from two silvery, vintage dining cars (the 1952 "Dottie's" on the right and the 1949 "Sweet City" on the left), connected by a newly constructed, red-white-and-blue-tiled lobby. Each lovingly restored car has its long dining counter, comfy booths, and the original terrazzo floor. Big windows let in plenty of daylight, and because the restaurant is set back from Lee Road on a slight rise, the view is unusually expansive. Mid-century recording acts such as Paul Anka, Little Richard, and the Kingsmen warble in the background, even though individual jukeboxes at each booth still weren't ready to rumble when we visited in late November. "Do those things work?" we asked a busboy, pointing to the empty boxes. "Oh, they work," he said. "It's just that the person who was supposed to write up the playlists took off two months ago and hasn't come back since. So if you put in a quarter and press some buttons, it'll play a song. You just don't know what song it will be."

If it seems hard to pick out a tune, just try deciding on something to eat from Dottie's encyclopedic menu. The diner is open for breakfast, lunch, and dinner, and the busy kitchen cooks up a dizzying array of choices. Breakfast noshes alone take up five pages, with everything from a hearty eggs-hash browns-bacon-toast-and-coffee combo to a more delicate seasonal-mixed-fruit-with-homemade-muffin-yogurt-and-juice plate. A "tall stack" of three buttermilk pancakes -- large as LPs, loaded with plump blueberries, and served with butter and maple-flavored syrup, with a side of applewood bacon -- was everything we hope for in a breakfast; purists will note that real maple syrup is available for a surcharge. Eggs Benedict Arnold, the kitchen's version of the Delmonico's legendary dish, was competently prepared, although the smidgen of puny Hollandaise sauce that topped it left us unimpressed. (And unfortunately, it may bear mentioning that the Mrs. Benedict Arnold, accompanied by tomato and avocado, was what we had actually requested.) Dottie's corned beef hash had coarse cuts of potato and meat that made it drier than most; however, those who frown upon greasy foods won't mind this a bit, and doctored up with plenty of ketchup and salt or Tabasco, the dish is savory enough for the most demanding hash-head.

Once breakfast hours are over (11 a.m. on weekdays and 1 p.m. on Saturdays and Sundays), Dottie's trots out the lunch menu, crammed with such indulgences as Chicago-style hot dogs topped with relish, pickles, peppers, diced onion, mustard, ketchup, and the requisite celery salt; sky-high Reubens, on Jewish rye from Davis Bakery; and lush bacon-cheeseburgers, on Orlando's toasted sesame-seed challah buns. Everyone at our table agreed that the juicy, 8-ounce Dottie's Favorite burger, with melted swiss, sautéed mushrooms, and paprika-spiked grilled onions, was one of the best burgers in town. And an open-faced hot turkey sandwich, with two thick slices of sturdy white bread, real roast turkey, delicate mashed potatoes, translucent herbed gravy, and coarsely cut cole slaw, was a perfectly executed classic. Meaty homemade chili went a bit heavy on the cumin, perhaps, and a little too easy on the kidney beans, but was otherwise thick and flavorful; a vegetarian version, with black beans and corn standing in for the ground beef, had plenty of body and zest. The only flop was the cappuccino-sized mug of chicken noodle soup, with a watery, weak-kneed broth and not enough noodles or chicken; still, the accompanying mini-loaf of moist, cake-like corn bread, studded with golden corn kernels, was almost adequate compensation.

Most kiddies of our acquaintance would already be delighted with a place that dishes up a steady diet of burgers, doggies, mac 'n' cheese, and audaciously creamy milkshakes, but Dottie's takes the "kid-friendly" vibe one step further by offering crayons and coloring paper, and a special menu of such small-fry treats as mini-wienies and hamburgers. In the meantime, at least until the tots start threatening to send their din-dins sailing across the room, Mom and Dad can lose themselves in homey plates of delectable brown-sugar meatloaf; crisp-crusted pan-fried catfish; and boneless fried chicken, all served with gravy, mashed potatoes, and unseasoned but adroitly cooked green beans and carrots.

Besides the milkshakes and fountain treats, sweet-ending options include an ever-changing assortment of freshly made pies and cakes from the diner's own baker, Pat Demski. Our choices -- a multilayered chocolate fudge cake and a tall wedge of Key Lime pie -- looked provocative enough to advertise in the back of this newspaper, but understated flavors and greasy frostings proved their undoing. Next time, perhaps we'll try one of Demski's fruit pies instead or sate our sugar lust with a chocolate malt or hot fudge sundae, leaving the flashier little numbers to less discerning palates.

Given the diner's fun-loving ambiance, it's no surprise to learn that owner Steve Presser's other business venture is Big Fun, a vintage-toy and collectibles store on nearby Coventry Road. Presser, along with partner and restaurant consultant Rose Carroll, has spent nearly seven years and untold thousands of dollars in making his vision of a lighthearted, family-friendly neighborhood eatery come true, but says he doesn't regret a single moment (or dollar). With that in mind, it seems perfectly reasonable that hungry fans have been willing to dismiss the hit-and-often-miss service and focus, instead, on the upbeat atmosphere and the tasty food. And why not? After Dottie's seven years on the drawing board, who's to say that a mere 30 minutes is too long to wait for breakfast?