Birth of the Blue

The Sapphire Grille sparkles where its predecessors sputtered. 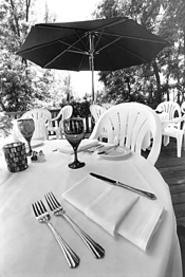 Unless they have achieved a certain level of cachet, restaurateurs know that building a strong following for a new dining room can be a long and arduous process. Even under the best of circumstances, diners stroll into a new spot practically daring the staff to impress them. And under the worst of circumstances -- say, when a previous occupant had developed a reputation for poor food and service -- it can be tough getting diners to come in at all.

Still, from beneath the onus of past failure, real gems sometimes emerge. And it's looking like the Sapphire Grille and Sushi Bar, formerly known as Eugene's, is going to be one of them.

Eugene and Larisa Em's new investor, Mary Ann Davis, has sunk a heap of money into the business (which, in an even earlier life, was The Swamp Club), and it shows. A large wraparound outdoor dining room, hidden from the road by a wall of mature trees, is one of the restaurant's most striking features, colorfully landscaped with hostas, a tiny waterfall, and a bouquet of blue and green market umbrellas sheltering white-cloth-draped tables. When the weather cooperates, a jazz combo performs here during weekend evenings; other nights, a natural soundtrack is provided by resident songbirds. But grabbing a table in the indoor dining room -- an airy, glass-enclosed, multilevel space overlooking the deck -- isn't too shabby, either, especially when staffers throw open the sliding glass doors and turn the room into a breezy indoor-outdoor space worthy of any Southern California daydream. Long, painted cloth panels serve as wispy window treatments here; shorter panels, swirling with shades of gold, plum, and cobalt blue, act as festive room dividers and could add sparkle to even the darkest winter day. The same blue accents show up again on the upholstered furniture in a sophisticated little lounge area and in the stemmed water goblets that glimmer on the large, well-spaced tables, along with fresh flowers, votives, and inconspicuous little salt and pepper shakers.

Back toward the restaurant's entrance, you'll find the spacious main lounge and bar, with tiny cobalt-shaded halogen lamps and a view of both the indoor and outdoor dining areas. Directly across from the lounge is the sushi bar, where small wooden boats transport cargoes of impeccable maki and nigiri sushi from the hands of the chefs to waiting diners, via a narrow water-filled "canal." (Each seat at the sushi bar is numbered, with corresponding numbers on the boats; when your boat floats by, simply remove your own tidy shipment and get down to business.)

A first-course "terrine" of fresh chopped figs, French chèvre, and warm diced potato, precisely stacked with a topknot of baby mâche and brought to rest in a shallow pool of smoky tomato broth with four garlic-toasted croutons, was a delicious example of the style, all awash as it was in coherent, contrasting flavors and textures. The already fine experience of Louisiana prawns en croûte -- three succulent crustaceans in a peppery marinade of Cajun spices, layered with sweetly caramelized Granny Smith apple rings and tucked into a lighter-than-air, walnut-studded pastry puff -- was beautifully broadened by an intense parsley-butter finish. And a thick slice of homemade veal, pork, and chicken pâté, wreathed in smoked bacon and settled on greens spiked with fresh strawberries and sweet onion confit, was clearly made in heaven. Not that Feuerborn always relies on layers of flavor and texture to make his culinary statements; the chef knows when to let a pristine ingredient speak for itself. Thus, our dining caps are permanently doffed to the platter of Sunset Beach oysters on the half-shell: six of the largest, freshest little beauties that ever sailed the seas, with an aroma as crisp as the ocean and a flavor as deep as the Marianas Trench. They were so good, in fact, that little side dishes of balsamic mignonette and horseradish aioli (optional sauces meant to tweak the tastebuds) proved thoroughly superfluous.

For the most part, the main courses were as satisfying as what had come before. Pan-roasted diver's scallops, paired with earthy mushroom risotto and a bit of roasted red-pepper cream sauce, were perfection -- all savory outside and buttery soft within. Smoky breast of free-range chicken, wrapped around a filling of "melted" leeks and baby spinach, then fanned out beside a portion of Parmesan risotto, was moist and straightforward. If two dryish double-boned lamb chops failed to rock our world, the accompanying sweetness and light of a lamb-infused demi-glace and a pureed potato-and-celery-root soufflé nearly did the trick. A simple pan-roasted filet of black grouper was done just right and, in its ragout of sweet corn, leeks, and smoked bacon vinaigrette, seemed almost light enough to qualify as spa food. On the other hand, a superlative 16-ounce New York strip steak, charbroiled to rosy rareness, sliced into lush medallions, and arranged around a stunning potato gratinée, was hearty enough for a lumberjack. And despite all this, when a bowl of homemade spinach linguine passed by, trailing an aromatic cloud of roasted garlic and fresh basil behind it, our nostrils flared, our mouths watered, and we had to restrain ourselves from begging for a taste.

For sweet conclusions, it would be hard to beat the Paris Brest: a traditional French pastry similar to a cream puff, filled with dense mocha whipped cream and juicy ripe berries. Then again, a slice of semi-frozen chocolate pâté -- with a texture like butter and the grown-up flavor of bittersweet chocolate -- transported at least one companion to a higher plane of consciousness. And a slab of warm, raisin-studded bread pudding, in well-balanced butter-and-bourbon sauce, had its share of staunch supporters, too.

As for the nitpicking, it's relatively minor. On more than one occasion, we were surprised to find the kitchen making unannounced substitutions -- walnuts for almonds, say, or green beans for snap peas. Some items, most notably the chicken and the risotto, could have profited from a touch more salt. The wine list (a solid collection of reasonably priced, recognizable names) was not automatically offered, a good selection of after-dinner ports had not been put in writing, and dessert wines were notably absent. And nothing on the dinner menu hinted that sushi was available in the dining room, although servers -- an unfailingly gracious and professional lot -- gladly brought the sushi menu upon request. (The sushi is quite good, in fact, and should not be overlooked.)

Despite its troubled past, this lovely suburban dining room now has much to recommend it. And if, unlike Tremont, the Warehouse District, or even Chagrin Falls, Solon isn't exactly known for its sexy "destination" dining, that could change. With just a little tweaking, the Sapphire Grille and Sushi Bar could easily become one of the region's top spots. For the present, it's definitely the place to watch.