Ja Rule, co-author of Jay-Z's 'Can I Get a ...,' tries to conquer the rap world with his first solo album, Venni, Vetti, Vecci 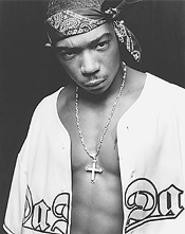 On his first solo album, last year's Venni, Vetti, Vecci, rapper Ja Rule (Jeff Atkins) boasts about riding through the 'hood with his thugs in tow, raising a ruckus because he's a "nigga for life." In the video for the album's single, the hit "Holla Holla," Atkins rolls into Rio de Janeiro in a lowrider with voluptuous women hanging on his arms. He's all about livin' large -- flashing the Benjamins and putting on airs. So what the hell is up with the cover art of Venni (which took its title, with altered spelling, from a Julius Caesar quote that translates into "I came. I saw. I conquered") -- why a photo of a pious-looking Atkins kneeling bare-chested with his hands folded and eyes raised up to the heavens before a statue of Jesus Christ?

"When I was trying to come up with something for the cover, my mind was racing, and I was thinking of all these different things," Atkins says via phone from his home in West Orange, New Jersey. "I went to Brazil to shoot the video for "Holla Holla,' and there was this statue of Jesus that stretched way up in the sky, and I felt that, in order for me to cleanse what I'm going through into this new world and what I needed to become, I needed to make a transition and speak to the man himself. I prayed a whole lot. When I had my daughter, it was like my blessing. It gave me something I needed to slow me down. It made me look at my life and see where it's going. I prayed a lot in doing my first album. I was a little nervous, because I was coming out of a group, and this was my first entrance into the whole solo thing. I had to stay strong."

Atkins's foray into hip-hop was actually shaky. His first group, the Cash Money Click, which, in addition to Atkins, included rappers Nemesis and Chris Black, released a single ("4 My Click") in 1995, but then Black was imprisoned (Atkins wouldn't say what Black did, only that it was "a minor crime"). Without Black, Nemesis and Atkins weren't writing any new material and, as a result, got released from their recording contract with TVT/Blunt Records. Producer Irv Gotti, who worked with Atkins when he rapped on Mic Geronimo's 1995 single "Time to Build," secured Atkins a deal with Def Jam that enabled him to work with both Jay-Z and DMX, two of the most successful rappers on the imprint. As a result, Atkins established a name for himself even before dropping Venni. He's not shy about giving Gotti, who now runs the Def Jam subsidiary Murder Inc., at least some of the credit for his success.

"I love Gotti," he says. "Me and Gotti been through a whole lot. I've seen people do their Hollywood thing through Gotti. I'm wit him. I'm ridin' wit him to the death. That's my dog, that's my nigga. Whatever happens, happens. We burn together or we fly together -- either way."

For Atkins, who grew up in Hollis, Queens (the onetime home of Run D.M.C.), rap music has provided a means of escape. While he maintains that his forthcoming record (a collaboration with a group of rappers called the Murderers, due out February 15) is "all gangsta," he admits that it's been a struggle to stay out of trouble -- something that even Puff Daddy and Jay-Z, despite making enough money to bankroll a small country, haven't been able to avoid.

"This game is real tricky," Atkins says. "They take us out of one environment and put us in another environment and everything's different. It's like if I took someone from Wall Street and put them in the 'hood, they wouldn't know how to survive either. It's one of those situations, and people don't understand it, because you're being taken from a bad situation and being put in a good situation, and they don't understand how you could fuck that up. It's really easy when you don't know what you're doing. You have to grow, and it's a learning process. You have to watch out for the spikes and shit around you and to avoid them."

While operating under the tutelage of Jay-Z and DMX has undoubtedly helped Atkins learn how to deal with fame and hone his rapping skills, it also suggests that he hasn't developed his own identity. After all, Atkins's vocals have the same raspiness as DMX's, and his knack for sing-song melodies (see "Holla Holla" and "Murda 4 Life") recall Jay-Z. It doesn't help that songs about guns and thugs -- not to mention "niggas" and "bitches" -- represent some of hip-hop's greatest clichés.

"You gotta understand that those songs were four years ago," Atkins maintains. "I've had that chance to settle myself down. You can't really say it's celebrating that stuff, because it's about pain, and I'm expressing it like everybody else does. It's a different pain, too. I listen to alternative music; I listen to people like Alanis Morissette, and she spits pain, but it's different. But to me, it's also the same. It's from two different worlds, but there's the same feeling behind it all. My pain is about guns and drugs, because that's what I've seen, and that's my pain. It might not be somebody else's, but everybody gets a chance to understand. It's about feeling. I feel music is about feeling."

Ironically, Atkins, who has a role in the forthcoming Madonna-produced feature film Ghetto Superstar, due out in March, just missed out on having one of rap's biggest hits ever. According to him, the track "Can I Get a . . .," one of the hits from Jay-Z's 1998 album Hard Knock Life, was his song.

"I was in the process of making my album when Jay-Z was doing his album," Atkins says. "I had "Can I Get a . . .' for my album. It was a record I was doing. It was my track, my hook, and my concept. Jay-Z heard it and said, "Yo. That's hot. Let's put that on my album.' I said, "No doubt. You're my nigga. I got love. Let's do it. I'm not out yet, and it would be a good opportunity for me to get out.' The rest is history. I don't have any regrets. You gotta look at everything for what it is. I am so happy that I had a chance to go through this game and to see the ups and downs. Had I not come out with Cash Money Click and seen the success and seen it fall apart, I might not understand certain things that go on right now.

"There's a reason for everything, and God has a reason for making things happen. For that song to go on Jay-Z's album and the Rush Hour soundtrack -- maybe that was the way it was supposed to go for me to be Ja."