One man's deceptions help to highlight our own flaws in The Human Stain. 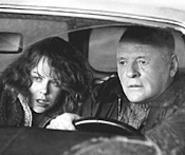 The riddles of identity that drive and disturb Philip Roth's impressive body of fiction usually focus on contemporary Jewish characters, whose conflicts between self-absorption and self-hate remain poignantly (and often hilariously) unresolved. But in The Human Stain, the first Roth novel to be adapted as a film in three decades, the author took on an even more daunting task -- the saga of a black man passing as a Jew in the ivory tower of WASP academia.

That the film, which is directed by Robert Benton (Kramer vs. Kramer, Nobody's Fool), stars a white Welshman, the magisterial Anthony Hopkins, adds yet another layer of transformational intrigue. Of course, Hopkins has already portrayed, with undeniable force, a demented American serial killer as well as Richard Nixon. So no dramatic miracle he pulls off at this point should come as a surprise.

For Benton and screenwriter Nicholas Meyer (The Seven-Per-Cent Solution, three Star Trek movies), the challenge was to somehow capture Roth's scope and complexity. The Human Stain concerns, among other things, the betrayal of family and self in the pursuit of freedom, the cost of radical reinvention, and the dangerous liberation of last-chance love, and that's a lot to get onto a movie screen in two hours. Filmmakers have failed Roth before, most notably in the cartoonish, dumbed-down 1972 movie version of Portnoy's Complaint, which remains the author's most widely-read book. But Benton and Meyer both have a literary turn of mind and a healthy respect for Roth, and if the full effects of the writer's sharp, wise-guy language get lost in the translation, the filmmakers nonetheless ably get inside the souls of his guilt-ridden hero and the damaged young woman (a smart, steamy Nicole Kidman) who offers him a last shot at redemption. And they show us the uneasy relationship between one troubled man and society.

Hopkins's Coleman Silk is, on the surface of things, an exemplary American success. First a brilliant professor of classics and then the silvery dean of faculty at a small New England college that he elevates from mediocrity to excellence, he's admired by his students and respected by his peers -- if sometimes grudgingly -- and his long marriage is happy. Silk's legacy seems assured. But when his tiny verbal misstep in the classroom ignites a political correctness debate, Silk's equilibrium is upset. Before we know it, his wife has died, he's stormed away from his career, and the tragic secret of his past -- the classicist's own Achilles' heel -- begins once more to eat away at him. In a perfect Rothian irony, Silk's unintentional verbal gaffe is held to be racist.

Hopkins's beautifully detailed, deeply felt acting remains a joy to watch, and this tale of a man whose lifelong deception is the apparent source of his triumph gives him even more to work with than the emotional repression of the butler in The Remains of the Day or the toxic genius of Hannibal Lecter. Coleman Silk is Hopkins's richest character yet. But an even greater pleasure, at least for my money, is Kidman's dark turn as Faunia Farley, the 34-year-old working-class beauty Silk falls in love with, against all the odds. Direct, sullen, and burning with raw sensuality, she's tough and vulnerable, and she's inexorably drawn to this older man because she has her own grief-drenched secrets. Their fierce, doomed relationship is a spectacle for grown-ups, like something from Shakespeare or the Greek playwrights, but these two extraordinary actors also bring to it the heat of our own moment. "I don't do sympathy," she warns him. Despite the hazards, Silk plunges ahead into one of the most complex and compelling love affairs in recent movie history.

Less successful are the flashbacks detailing Silk's early traumas in segregated, 1940s America (Wentworth Miller plays him as a young man) and the presence of Roth's old writer-friend, Nathan Zuckerman (Gary Sinise), in the twin roles of confidant and Greek chorus. As the novelist's devoted readers know, Zuckerman is the persistent, goading alter-ego Roth has put front-and-center in half a dozen of his books since the 1970s. But Sinise's Nathan, younger and more wide-eyed than we'd expect, seems more an accessory or a convenience here than a vital character, and this Silk probably could have done without him. On the other hand, Lester Farley (Ed Harris) is essential: Faunia's jealous and crazed ex-husband propels the tragedy and casts another, harsher light on the fluidity of personal identity.

For Benton, whose career reaches all the way back to Bonnie and Clyde (he wrote the screenplay with David Newman), The Human Stain must have presented huge obstacles. With wisdom and grace -- and the courage of a wonderful cast -- he's conquered them. It's a relentlessly moving film, with emotions that are the equal of its ideas and an unsettling vision of the fatal imperfections in us all.