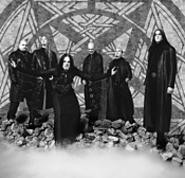 "It's not like we hate everyone," clarifies Silenoz, guitarist for Norwegian black-metal marauders Dimmu Borgir. "We hate those who deserve the fucking hate."

All this real-life carnage and chaos has made the black-metal scene one of the bleakest, most intimidating around. Bands paint black scowls on their faces and grimace in publicity shots as if the photographer kneed them in the nuts before snapping the photo. It's within this atmosphere of doom and gloom that Dimmu Borgir has come to turn those frowns upside down by not taking itself quite so seriously as the others.

"There's no point in denying that you're a fucking human being and you want to have fun sometimes," Silenoz says. "In the early '90s, everything had to be so fucking dark, you had to be silent all the time and couldn't show a fucking smile. But that passes, once you start to grow up and you experience new stuff in life. Now we're taking the rebellion to a more intelligent level, and we use the music as a weapon instead of fucking torches and gas. It makes you open your mind."

From the outset, this open-minded approach has set Dimmu Borgir apart from the dogmatic black-metal throngs. Though it began as a primitive, flesh-ripping metal ensemble on its 1994 debut EP, the band quickly progressed into a much more formidable, experimental troupe, and by 1997 had begun to explode the bounds of black metal with its landmark Enthrone Darkness Triumphant. By incorporating sensuous dark harmony and clean, operatic vocals into its barrage of blast beats and banshee shrieks, Dimmu Borgir greatly broadened black metal's appeal. Enthrone went on to move over 150,000 copies and established the band as the world's second-biggest black-metal act, behind the U.K's goth-leaning Cradle of Filth.

Last year, Dimmu returned with its most provocative effort yet in Puritanical Euphoric Misanthropia, its fourth full-length. Incorporating an orchestra into the mix, Dimmu Borgir added further depth to an already elaborate sound by creating a symphonic masterwork that's one of the most lush and gorgeous black-metal recordings ever. Of course, all of this has quickly led to a backlash against the band by black-metal hard-liners, who feel Dimmu Borgir has commercialized the art form and thus diluted its message.

"In black metal these days, there's not much controversy left, so we're happy to be a band that can still piss people off," Silenoz says. "We've never been afraid of trying out new stuff and trying to experiment. Sometimes it works, sometimes it doesn't, but still, you won't know until you've tried it. I guess that's kind of our recipe: We just do whatever the fuck we feel like is right for us to do. If we get to piss off a lot of people because they don't like the way we are, then that's great."

And there's plenty about this band to get folks riled up. Dimmu's unflinching anti-Christian stance has garnered it much censure, even from its label, Century Media, which refused to print the lyrics to Enthrone's "Tormentor of Christian Souls," which contains lines like "When I have seen your church go up in flames/I will laugh/When I have seen you mourn over loved ones/I will feel bliss when your mortal soul is in ruins." Granted, that's pretty tame compared to Marduk numbers like "Fistfucking God's Planet," "Christraping Black Metal," and "Jesus Christ . . . Sodomized," but for a band with a much higher public profile -- Dimmu has been nominated for the Norwegian equivalent of a Grammy -- such sentiments have proved to be scandalous.

"We are not out to convey any message or convince people about anything; we're just putting our option out there," Silenoz says. "We have a very wide perspective on things. It all just boils down into a misanthropic attitude. Instead of searching for yourself and your own identity through religion, you should go with what you were born with: your brain."

Black metal is posited on such egoism and the elevation of the self above all else. In a way, black-metal minions like Silenoz are simply long-haired, leather-clad Tony Robbinses, giving kids pummeling pep talks about the value of self-determination. Amid all the spilled entrails and dead clergy, the message is clear and brazen: Be your own person or be dead. As for all the gore and bloodshed, it's little more than a violent, visceral way of further distinguishing the genre from all others and driving home its message of individualism.

"It's great escapism in a way," Silenoz says. "You get to go to a show and just fucking let the bad feelings out and think about something else for an hour and a half. That's what we're about. I hate to use the word 'therapy,' but that's the way it's always been with me. I've been listening to metal music since I was a little kid. For me, it's a positive thing."

For us, it's a reason to get fitted for a new athletic supporter.