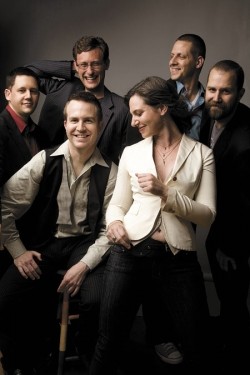 Tim Munro has a broad role in the ensemble known as eighth blackbird. He plays flutes - the standard C concert flute, plus piccolo and alto flute - but there are also tasks that some contracts would describe as "other duties as assigned."

"I also bang on things and scrape things," he says. "And I play piano sometimes."

The group's repertoire includes works that call for the pounding of brake drums, as well as the tapping, scratching and brushing of tabletops. As the only non-original member, Munro - who is from Australia, but studied at the Oberlin Conservatory - wasn't around when eighth blackbird formed 12 years ago as an offshoot of the conservatory's Contemporary Music Ensemble. He joined three years ago, having been recommended by the ensemble's director when his predecessor left the group. But he's seen the pictures.

"There's a totally adorable photo of them outside a diner in Oberlin looking amazingly geeky," he says of the group's early days in the cosmopolitan college town. "They never intended it to become a long-term thing."

But since then, they've not only stayed together - which is saying something for six people from around the country bound for performance careers and graduate school - but they've developed a group identity that distinguishes them from the multitude of string quartets, quintets, trios and other chamber ensembles. They've developed a recognizable brand for their meticulously crafted performances of new music.

"Bluntly, they just kept winning things," says Munro. "After one competition sponsored by the Concert Artist Guild in New York, they won free management, and then they got picked up by a professional management company [Opus 3]. That enabled them to just keep rolling. Even till four or five years ago it was still functioning like that, with the members thinking, 'Let's just give it another year or so.' Then they started picking up ongoing ensemble-in-residence positions."

Among the things they won was a Grammy for Best Chamber Music performance earlier this year for their album Strange Imaginary Animals.

Eighth blackbird is the ensemble in residence at both the University of Richmond (Virginia) and the University of Chicago. Their unusual instrumentation (Munro on flutes, Matt Albert on violin and viola, Matthew Duvall on percussion, Lisa Kaplan on piano, Michael J. Maccaferri on clarinets and Nicholas Photinos on cello) has roots in Schoenberg's 1912 composition Pierrot Lunaire. They are named for the eighth stanza of Wallace Stevens' poem "Thirteen Ways of Looking at a Blackbird."

The group has been based in Chicago since 2000, when they moved there to study at Northwestern University. They decided to stay and use the Windy City as a base because its central location and airline connections served their schedule well. Besides that, "It's less than half the price of living in New York," says Munro.

University residencies have given them the stability and a full-time base to pursue performances and develop new music. In addition to playing high-profile venues like Carnegie Hall, the Kennedy Center, the Library of Congress, the Cleveland Museum of Art and Tanglewood Music Center, they've played in South Korea, Mexico, Canada and Amsterdam. When they perform as part of Oberlin's distinguished Artists Recital Series on Tuesday, they join a lineup that has included performances by the acclaimed violin virtuoso and one-time child prodigy Midori, as well as the Cleveland Orchestra.

In short, they have arrived in a way that very few music ensembles ever do. Their record of commissioning new works is also stellar, both in volume and in the composers they've been able to attract. "They just started commissioning from go," says Munro. "They've commissioned something like 120 or 130 pieces in 13 years. It's been a conscious effort to build repertoire."

Among the composers on their list are the Pulitzer-winning Paul Moravec, the renowned minimalist Stephen Reich and Stephen Hartke. In fact, the ensemble recently earned a commission that the members can't quite talk about yet. What Munro will say is this: "A significant American orchestra" has commissioned composer Jennifer Higdon to write a new concerto for ensemble and orchestra to feature eighth blackbird. Munro says the composer knows the group well, so he's hopeful that the work will show off the entire ensemble as an instrument unto itself but also the individual skills of its members.

Tuesday's program will feature vintage eighth blackbird. The first piece, "Knight, Death, and the Devil" by the relentlessly political Fred Rzewski, was commissioned by eighth blackbird with support of the Oberlin Conservatory and the University of Chicago. It's based on songs associated with war and inspired by the 15th century Albrecht Durer engraving of the same name. Also by Rzewski is "Les Moutons de Panurge" ("The Sheep of Panurge"), which builds as musicians repeatedly play the beginning of a 65-note melody, adding a note to it each time until the whole melody is played. At which point, they begin to subtract notes until only one is left - when, as Rzewski directs, all the musicians begin to improvise.

Also on the program are two pieces by Stephen Reich. Two Oberlin students will perform a multimedia interpretation of "Cello Counterpoint," with the counterpoint provided by a student's video, which adds images of the cellist performing recorded pieces. The other work is a second world premiere for "Double Sextet." Eighth blackbird performed the piece accompanied by a recording of itself. The group performed the piece that way for the first time last spring. This time, with the luxury of a conservatory of fine student musicians, they'll play it with the second sextet performing live. Six Oberlin students and eighth blackbird will be divided into two sextets that echo each other and throw themes back and forth.

That will be a conversation folks who care about new music won't want to miss.