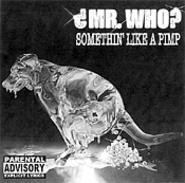 "These are the kind of tales told at midnight," goes the intro to The Hoe Tales, a collection of rhymes as filthy as Redman's apartment. With enough heavy breathing and hot talk to rival the entire Vivid Video catalog, this disc packs the raunch of a Porky's marathon. Smoother than the Smut Peddlers, rawer than 2 Live Crew, Blak Stallion is rap at its most ribald. "Sex in the morning/Sex at night/Sex in the afternoon's all right/Cause ain't a nigga on Earth that can stay alive without a freaky-ass bitch to supply the sex drive," goes one of the few rhymes we can print.

Putting aside all the puerile titillation, though, The Hoe Tales isn't all cheap thrills. Blak Stallion brings enough bawdy beats and old-school funk to make him an honorary member of the Dungeon Family. Overlaid with equally funny and ferocious thugged-out rhymes, it all makes The Hoe Tales so dirty, you'll need a good long shower afterward. Preferably with the missus.

Almost as gleefully vulgar is Mr. Who?'s Somethin' Like a Pimp. Hell, the cover is a shot of an ice sculpture of a dog crapping out diamonds. While not as brazenly sexual as The Hoe Tales -- indeed, few things are -- Pimp is just as pointedly illicit. "Be hype niggas/Y'all ain't really sayin' nothin'/Y'all just hating because it's y'all bitches we be fuckin,'" Who? spits on the confrontational "Mic Check."

Minimalist production puts Who? high up in the mix on many of these cuts, and his lascivious, laidback flow suits its stark surroundings. Unfortunately for Who?, he has the spotlight stolen on a number of occasions by the flock of guests on this disc -- namely Vic Freeze with his manic wordplay on "Fastlife" and the booming Drilla on "Where My Pros At." Still, Who? delivers on the Jay-Z-esque "Inda O-H-Ten," which rides a mean percussion loop, and the sentimental slow burn of "Come on Thru," where he shines like the jewels on Pimp's sleeve.