Intermission kicks through the debris of modern Ireland. 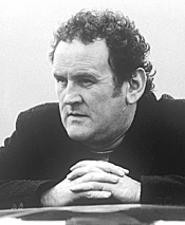 As a proud sponsor of the Colin Farrell media blitz, Intermission opens on the lad's salable mug, basically sporting the same buzz-cut 'n' tats look from his punky cameo in Veronica Guerin. It's a cunning editorial move, pushing the product from the get-go, yet it gets interesting as Lehiff, Farrell's dumb thug, puts on a romantic swagger to chat up a lovely waitress (Kerry Condon). Some might say it's adorable. Then he brutally sucker-punches her and steals the cash from the till, which ought to be a shock, until one's fruitful imagination intercepts the moment: That could've been Farrell's idiotic tabloid playmate Angelina Jolie getting smashed in the face, which would have been really, really funny!

Thus warmed, we enter into the 2003 debut feature by Irish director John Crowley, unfortunately filmed in a process we'll call HeadacheVision. The camera operator and zoom puller are clearly both epileptics, and apart from when this twitchy movie takes a brief breather in a steady master shot, the whole thing feels queasily like '90s television or a prolonged jeans commercial -- an "aesthetic choice" so annoying, you may be tempted to walk out.

Don't. Stay planted through the end credits (wherein, incidentally, Farrell lays down a serviceable rendition of "I Fought the Law"). Give contemporary Dublin and its apparently rough 'n' ready denizens a little time to work on you. Stupid camera shenanigans aside, theater veteran Crowley deftly directs his large, stellar cast, and playwright-cum-screenwriter Mark O'Rowe serves up a wild knot of character arcs pitched somewhere among the neighborhoods of Ken Loach, Mike Leigh, and Danny Boyle -- kind of an About Adam romantic mess writ hyper. You'll emerge bruised and grinning.

The crux here is that angry young pretty-boy John (Cillian Murphy, 28 Days Later) lacks faith in his girlfriend, Deirdre (Kelly Macdonald, Stella Does Tricks), and thus breaks up with her to test her love. Her response is to shack up -- and shag down -- with a balding buffoon named Sam (Michael McElhatton), which sends Sam's pretty wife, Noeleen (Deirdre O'Kane), into a sex-mad rage, drawing in John's naive mate, Oscar (David Wilmot), for her own boudoir-revenge tactics. Virtually everyone in town ends up thrashed and transformed by John's little emotional intermission, which lends the movie its title.

While far from plotless, Intermission is definitely a product of our ADD-riddled era, with its careening storylines crunching into each other like . . . well, you fill in the cheesy simile, 'cause I'm already thinking of something else. For Trainspotting fans, there's John and Oscar, wannabe hipsters serving time at the local supermarket under their totalitarian boss, Mr. Henderson (Owen Roe), who spouts quasi-Americanisms, haughtily chasing them with "as they say in the States." The four or five aficionados of Once Upon a Time in the Midlands can savor a zany heist, enjoyably bungled. Those who dug the recent Wilbur Wants to Kill Himself, Michael Winterbottom's Wonderland, or even the Bridget Jones franchise will find themselves banding with these lonely hearts. There's even a documentarian (Tom O'Sullivan) struggling to catch all the action, à la Winterbottom's feckin' brill clubbing manifesto, 24 Hour Party People.

The link, of course, is the astonishing Shirley Henderson, featured in all of the above, who once again turns in a subtly remarkable performance as Sally, Deirdre's mousy, antisocial sister. Having, to her emotional undoing, trusted a dastard (he literally shat on her), Sally is letting her mustache grow out -- a mad bus driver played by Brian F. O'Byrne kindly likens her to Tom Selleck -- and opting out of social graces in favor of bludgeoning honesty. Her aching exchanges with her widowed mother (a superb Ger Ryan) deserve a movie of their own.

Unlike those in the self-obsessed nebbish's sappy wet dream that is Eternal Sunshine of the Spotless Mind, lovers in Intermission are ravenous, selfish, and beastly -- which proves quite a refreshing mirror of the world those of us inhabit who do not believe that every script has to focus on variations of its own one-note screenwriter, lazily tied up with a magical little bow. The formerly surprising Charlie Kaufman is spent, and fantasy belongs in Middle Earth and Hogwarts; it's a joy here to see callow bitches and bastards depicted as such, with no hackneyed reconciliation in sight. A single sequence here, set in a "mature" disco and hilariously haunted by the tunes of Billy Ocean and Spandau Ballet, effortlessly blows away the Interminable Blandness of the Redundant Navel-gazing currently being shoved down our throats.

In its own much more palatable version of the hard sell, Intermission also offers up Colm Meaney, the Emerald Isle's ubiquitous answer to Gene Hackman (imagine Meaney playing Popeye Doyle; Jaysus!) as a pushy, pugnacious detective desperate for fame. He's a crude, deluded character among dozens of others, as vital as the scenarios around them, from a land of natural storytellers where even miscellaneous detritus can hold one rapt. God bless the Irish.