Bat Boy touches down in Canton. 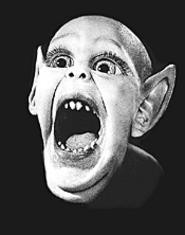 Of all the shows Steve Arnold has previewed for the Players Guild this season, Bat Boy: The Musical is by far the most kitschy. The script is based on a 1992 series of reports in Weekly World News about a "human bat" found in a cave in the Virginia mountains. "He's become a pop icon in contemporary historical settings," says Arnold, the theater's artistic coordinator. "It's a ridiculous, tongue-in-cheek premise that takes itself seriously, so we can laugh at its ridiculousness." And take heed of the show's mature-audiences-only warning. "It's not disgusting or gross," clarifies Arnold. "But it's not exactly what we'd want parents to bring their kids to. None of it's in-your-face, but we're also Canton, Ohio." Bat Boy takes flight Friday through March 20 at the Players Guild's Arena Theatre, 1001 Market Avenue in Canton. Show times are 8 p.m. Friday and Saturday and 2:30 p.m. Sunday. Tickets are $15; call 330-453-7617. -- Cris Glaser

Adrian Byerly admits she's a fan of "really crappy '80s movies." So the Public Squares founder didn't waste time in naming the comedy troupe's new show after Breakin' 2: Electric Boogaloo. "It's horrible and wonderful and cheesy, all in the same way," says Byerly about the 1984 hip-hop flick. "I figured the title of our show should be catchy and grab people's attention." The Squares are dishing up two hours' worth of sketches and improvised skits -- from a satirical take on American Idol and a spoof about a couple having an argument on their answering machines to a tongue-in-cheek advertisement for home-schooling. "We're doing a lot more political stuff and taking on some taboos," says Byerly. "It's one of those things you gotta see." Show time is 8 p.m. Saturday at the Croatian Tavern, 3244 St. Clair Avenue. Tickets are $8, $7 for students; call 216-771-4727. -- Cris Glaser

Say No to Emo

Don't be fooled by former Dinosaur Jr., Sebadoh, and Folk Implosion member Lou Barlow's latest CD, Emoh. Barlow's first official solo album may crib its title from the genre that favors whiny, heartbroken boys armed with guitars and open diaries, but it is, in fact, a culmination of the music Barlow's been making for nearly two decades. Acoustic guitars, cellos, and loops share space here, and if the lo-fi tag doesn't quite fit anymore, at least the indie-pop one still does. Barlow is at the Grog Shop (2785 Euclid Heights Boulevard in Cleveland Heights) at 9 p.m. Saturday. Tickets are $10; call 216-241-5555. -- Michael Gallucci