Blood on the Racks

As Bob Dylan turns 60, his life and legacy are explored in two new biographies.

May 24, 2001
comment
Down the Highway: The Life of Bob Dylan Howard Sounes Grove Press

Behind the Shades Revisited 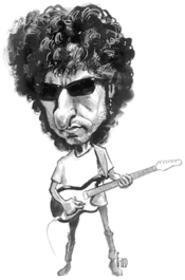 When Bob Dylan played at Public Hall three years ago in support of his last studio album, 1997's Time Out of Mind, he performed with an agility that belied his age. Dylan duckwalked his way through "Silvio" as if he were a young Chuck Berry and slung his guitar fervently while playing "Highway 61." He may not be able to do the splits or the kneedrop anymore, but he can still wail.

When he played "Things Have Changed," a sharp, rolling rant on aging with a characteristically misogynistic backstory, at the Academy Awards (it won Best Original Song) earlier this year, his performance glistened, even though it was telecast from Australia. Dylan's song, which comes from Wonder Boys, a film about a literature professor who suffers from writer's block, is so apropos, it makes you wonder whether he could be similarly labeled. After all, what Dylan's next project will be and when it will be released is a matter of conjecture.

Why does Dylan matter? Because the best of his 450-plus songs resonate, no matter the times. The man born Robert Allen Zimmerman also matters because, while you can summarize him, you can't nail him down.

Despite his low recording profile of the past few years, Dylan continues to tour and remains a celebrity. As he turns 60 (his birthday is May 24), he's the focus of two biographies. In Howard Sounes's Down the Highway and Clinton Heylin's Behind the Shades Revisited, the man's whole life is accounted for, but neither author (both are British journalists) was able to obtain an interview with the elusive figure. (Dylan's also an important part of David Hadju's Positively 4th Street: The Lives and Times of Joan Baez, Bob Dylan, Mimi Baez Farina and Richard Farina, a book that dwells on his early New York years.)

While Heylin's book is more thorough, Sounes's is more sensationalist, more gossipy, and more engrossing. Sounes, who also wrote a biography of Charles Bukowski, writes with passion. Heylin, whose book is a thoroughly rewritten update of a biography he published 10 years ago, is more obsessive and analytical. It's the difference between newspapers and magazines -- or, more narrowly, between The National Enquirer and People. Because they couldn't speak to Dylan, one of the best-insulated performers in pop, both Sounes and Heylin had to rely on legal documents, published accounts, and interviews with the numerous people who have been party to Dylan's efforts in the studio and on the road. Both suggest Dylan is a bad businessman: His naïvet´ in dealing with Albert Grossman, the legendary manager who helped bring him stardom while milking him for years, is as inexplicable as Bill Clinton's affair with Monica Lewinsky.

Despite the detail and the depth of reportage, both books fail to humanize Dylan. That may be because he refused to be interviewed, but even when he seeks publicity, he's a notoriously difficult subject. The very notion of an "authorized" Dylan biography is oxymoronic, because it would be heavily slanted or tied up in lawsuits. Besides, the infamously private Dylan is famous for letting his work speak for itself.

The more likely reason the books don't crack the slippery Dylan enigma is that the key to Dylan is the way he changes attitudes, even personalities. Dylan, after all, is a trickster, a shaman. The way he changed musical languages in the '60s continues to resonate, even if, as Heylin so provocatively maintains, Time Out of Mind is more a pastiche of folk templates than an original creation. But then, Dylan had trouble settling down in his personal life, too; Heylin claims Dylan has had three wives and is the father of eight children.

As a performer, Dylan can be riveting or desultory, a contrast the critically superficial Sounes, who is clearly less connected to and less knowledgeable of Dylan than Heylin, fails to note: "Dylan tours the world relentlessly and is one of the hardest-working live performers in music," Sounes writes. "On stage, he is truly dynamic, exuding a palpable charisma comparable to the likes of Elvis Presley and Frank Sinatra."

Heylin takes a harder road, exhaustively chronicling Dylan's great performance eras of the mid-'60s, the Rolling Thunder Revue of the mid-'70s, and the "Never Ending Tour" Dylan launched in 1988. His interviews with about 240 people and his own observations provide a richer, more measured picture of both performer and recording artist. If only Heylin didn't view himself so grandly: "After all, as I am forever reminded, I have never actually met the man around whom I have spun so many of my musings," he writes. "And if one has not met one's biographical subject, how -- the subtext goes -- can one hope to know him, let alone explain or reveal him to unknowing eyes?"

Heylin strains to position his tome as definitive biography, not memoir. And unlike Sounes, he can be demure: "Knowing of at least one of Dylan's children by one of his '80s backing singers in 1991, I nevertheless chose to respect their right to privacy," he writes, explaining why he didn't report that juicy fact in Behind the Shades, Edition 1. Heylin's mission is more critical, less tabloid. Where Sounes revels is in the mundane and the domestic: His account of Dylan's childhood in his Duluth, Minnesota birthplace and in Hibbing, the surreal Minnesota town where the Zimmerman family moved in 1946, is fast-moving yet rich in detail. Their fixations and methodologies come clear in these quotes.

The first is from Sounes, quoting Chuck Plotkin, the Springsteen producer Dylan tapped for the controversial, poor-selling "born-again" album, Shot of Love, in 1981. Dylan was late for a recording session, because he couldn't find his way to the studio from East Los Angeles: "He got lost because he is actually present where he is. He is not just simply following some map. He doesn't want to be following some map back to the same spot every day," says Plotkin. "He just takes a new route that he's never taken and ends up someplace that he's never ended up . . . The guy's a songwriter. He has to keep that alive. And it's Dylan. It's not some ubiquitous pop-tune hack. He doesn't have to be a regular guy. Can you sit down and talk to him about a football game, you know, have a beer and watch a football game? Sure. Does he give a damn [about] a lot of the same things that everybody else seems to give a damn about? From time to time, in certain ways, up to a certain point. Is he a regular guy? No. Why would you want him to be?'"

Here's Heylin quoting Jerry Wexler, Aretha Franklin's producer, on producing Slow Train Coming, Dylan's most dogmatic "born-again" album. The 1979 disc is also one of Dylan's best-sounding. It reflects his conversion to Christianity, courtesy of the Southern California fundamentalist group Vineyard Fellowship: "Naturally, I wanted to do the album in Muscle Shoals -- as Bob did -- but we decided to prep it in L.A., where Bob lived," Wexler says. "That's when I learned what the songs were about: born-again Christians in the old corral . . . I liked the irony of Bob coming to me, the Wandering Jew, to get the Jesus feel . . . [But] I had no idea he was on this born-again Christian trip until he started to evangelize me. I said, 'Bob, you're dealing with a sixty-two-year-old confirmed Jewish atheist. I'm hopeless. Let's just make an album."

Ultimately, though they vie for attention at an appropriate and potentially commercial time, the Sounes and Heylin books overlap, suggesting there may be a limit to what can be written about Dylan. The impetus is common: a need to explain the man's unique artistry through his biography. The approach is different, the details somewhat divergent. Together, the books chronicle a remarkable artist of contradictory, complex personality. But they don't paint Dylan's picture as compellingly as he does himself.