Dobama's politically misplaced In the Blood crackles with superior performances. 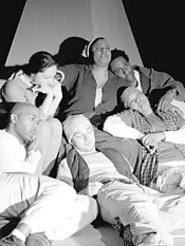 Sometimes a playwright just can't win. When Suzan-Lori Parks finished writing In the Blood some three years ago, she stipulated the setting as "here and now." Fat chance.

In her play, a homeless unwed African American mother with five illegitimate kids is forced by a government health system to get her tubes tied. How was Parks to know that, in today's Bush-Cheney neo-con world of righteous moral absolutes, this mother would instead be encouraged (or compelled) to have even more kids. Then she'd be denied government assistance, since funding for all the "do-gooder" social programs has been drained so that billions can be stuffed into the pockets of the rich and military contractors. Hey, righteous moral absolutes are just for the lower 95 percent in income, remember?

Our country has changed a lot since Bush's Supreme Court-sanctioned coup d'état, and that renders Parks's drama, now having its Ohio premiere at Dobama Theatre, more of a period piece. But it's still a damn fine theatrical experience. In the Blood is essentially a contemporary interpretation of the good vs. evil themes in Nathaniel Hawthorne's The Scarlet Letter. In 17th-century Boston, Hawthorne's Hester Prynne was labeled with the scarlet "A" for bearing a child from an adulterous relationship. The mother in this play, also named Hester, has trumped that reproductive output by popping out five urchins with five different absent men. She just wants a "leg up" to get her life straightened out, but all she gets is the boot and spends her days trying to scratch out a meager existence under a grimy bridge in an anonymous American city.

Just like her namesake, Hester will not cop to the identity of her brood's fathers, so she struggles to elevate her life through hard work and teaching herself the alphabet. She's mastered only a capital letter "A," which she writes at every opportunity, and which becomes her badge of shame in our glorious information age. Regardless of her educational shortcomings, Hester is generous to a fault with everyone, including the scabrously selfish men who have fathered her children. Among them is Reverend D. (Anthony Elfonzia Nickerson), interrupting his spiritual invocations to demand a blowjob from Hester, who is visiting him to seek child support. She obliges. Along the way, her good nature is victimized in various ways by lots of others, including her street buddy/prostitute Amiga (played with sinuous sleaziness by Cassandra Vincent). Thankfully, Parks avoids turning Hester into a masochistic schlemiel by giving her great personal dignity and a glow born of her supersized maternal affection. Those qualities are sorely tested, however, and near the end, she buckles under the pressure.

Most of Parks's characterizations in Blood are stereotypes, and Hester herself never really grows beyond her too-good-to-be-true persona. But these weaknesses are redeemed by the script's lively street-beat language. At one point, Amiga comments on Hester's moral focus: "A woman like Hester, driving her life all over the road, most often chooses to walk the straight and narrow." And Reverend D. shabbily blames Hester for their child-producing liaison: "Suffering is an enormous turn-on. She had four kids and came to me asking what to do. She had eyes . . . that say red spandex."

In an exceptional cast, the standout is Rasheryl McCreary, who is achingly wounded and relentlessly resilient as Hester. Perhaps her best moment is when she reconnects with Chili, the father of her first kid, and they do a memory dance, with McCreary's radiant face capturing the all-too-fleeting magic of the moment. As the eccentric Chili, Victor Dickerson twitches and twirls seductively in a radioactively vibrant blue suit. (Every actor except McCreary is double-cast as one of Hester's five children, and since three of the fathers play their own sons, the resemblance is . . . um, uncanny.)

Even given the dour subject matter, there are plenty of chuckles. One of the best is provided in a piece of stage business performed by a pitying yet predatory public health department doctor (Kevin Brewer), who brings his examining table with him in a truly ingenious way.

There is an irresistible musical flow to this material, and director Sonya Robbins has her players performing like a troupe of jazz all-stars -- blending smoothly during the ensemble family scenes, then vamping soulfully in their solo turns. The mood is augmented immeasurably by Todd Krispinsky's realistic set design. A few feet of dead-end railroad track and large concrete footers holding the bridge's rusting girders convey the rooted hopelessness of Hester's claustrophobic universe.

Parks's play seems to ask this ultimate question: Are our fates, like Hester's, inherently a part of us and "in the blood"? No doubt Bush and Cheney would answer yes, and would freely offer all the help they could, if only that blood were blue.