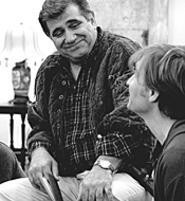 Although Michael Bloom, the Cleveland Play House's new artistic director, didn't choose the season's inaugural production -- the world premiere of Ken Ludwig's Leading Ladies, opening Tuesday -- he says it's a fitting intro to his tenure. "It's a valentine to the theater and a salute to actors," he explains. "It's a good way to say welcome." The comedy -- about two struggling Shakespearean actors working in the Amish countryside, who get mixed up with a wealthy old woman looking for her long-lost heirs -- is a harbinger of great things, promises Bloom. "It's a transition year. I want to reconnect the Play House with the community. Rather than doing classics because they're classics, we're going to be doing material that speaks directly to our audience." Leading Ladies is at the Cleveland Play House (8500 Euclid Avenue) through October 3. Show times are 8 p.m. Tuesday through Friday, 4 and 8 p.m. Saturday, and 2 p.m. Sunday. Tickets are $12 to $49.50; call 216-795-7000. -- Michael Gallucci

Ben Stein was a speech writer for Richard Nixon. He went on to more important work, like playing a droll teacher in Ferris Bueller's Day Off. Stein presents "How to Ruin Your Life" at Baldwin-Wallace College's Kleist Center for Art & Drama (95 East Bagley Road in Berea) at 8 p.m. Thursday. Admission is free; call 440-826-2322. -- Michael Gallucci