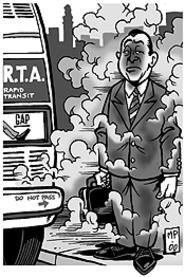 "The Regional Transit Authority staff that want to replace natural gas buses with diesels should park behind a diesel bus for 10 minutes every day while it spews out fumes," ranted one typically caustic letter in The Plain Dealer.

The reason for the recommendation was simple: cost. RTA currently operates 166 buses powered by compressed natural gas (CNG), about 22 percent of its fleet. They are markedly more expensive to buy, operate, and maintain than comparable diesel-powered vehicles -- over the 12-year life of a bus, about $56,000 more, according to an analysis completed in May 1999. The task force suggested waiting until the costs of CNG buses are more in line with diesel buses.

The reason for the public uproar was also obvious: People don't like their transit dollars going toward equipment that pumps clouds of black pus into the air they breathe. So last spring, RTA backed off the recommendation. Its board of trustees, arguing that the environmental benefits outweigh the added costs of the buses, voted to continue purchasing more CNG vehicles.

But in a report issued last month by the federal government's General Accounting Office, the investigative arm of Congress, the Feds came to the same conclusion that RTA did more than a year ago. "Recent studies indicated that, despite great strides by engine manufacturers, CNG buses' engine and fuel system[s] will likely remain less reliable than these components in diesel buses for the foreseeable future," the report says. Further, it notes, "The higher costs and reduced reliability of alternative fuel transit buses have led some transit operators to discontinue operating [them]."

Most notable was GAO's finding that some transit authorities now wonder whether CNG buses are worth it. "The environmental advantages that CNG and alternative fuels once enjoyed over diesel have dissipated," the report says, "making transit operators less likely to switch to CNG and other alternative fuel technologies."

It's an issue that nobody thought RTA would have to contemplate 10 years ago, when Cleveland's transit poobahs thought they had hit upon the perfect solution to a problem vexing public transportation authorities all over the country: how to be financially responsible without crapping all over the environment. RTA's answer was unique and important. It decided to become a national leader in employing a new kind of bus, powered by natural gas instead of soot-spewing diesel fuel.

Along with improvements in air quality, the CNG buses seemed to offer clear-cut advantages. Natural gas was cheaper than diesel fuel. And since it was "clean-burning," there should be less wear on the engines, meaning fewer operating and maintenance costs.

But it didn't exactly turn out that way. "It seemed like a really wise decision" at the time, says Michael York, RTA's deputy general manager for operations. "The experience, however, has been somewhat different . . . We have not had the best experience, financially, with CNG buses."

RTA found that CNG buses needed much more, not less, maintenance than diesel buses. And because CNG technology is still relatively new, parts for the buses are far more expensive than common diesel engine parts. Even the fact that natural gas is cheaper than diesel fuel has been undermined by the reduced fuel economy of CNG buses. (According to a Federal Transit Administration study, they are 20 to 40 percent less fuel efficient than diesel buses.)

Other public transportation agencies around the country have had similar experiences. While the number of CNG buses in use continues to rise -- from just 116 in the U.S. in 1992 to about 3,400 last year -- the price also continues to remain significantly higher than diesel buses, contrary to what many in the industry predicted a decade ago. According to the GAO, CNG buses typically cost 15 to 25 percent more to purchase than diesel buses, and maintenance is also more costly. Transit authorities in both Miami and Houston, in fact, have switched back to buses that use exclusively diesel fuel, due to "higher costs and reduced reliability," according to the GAO report.

For some transit agencies, those cost and reliability issues are justified by the environmental benefits associated with CNG buses, GAO found. Though the precise difference CNG buses make in air quality has not been quantified, no one disagrees that they're better for the environment than diesel-power vehicles, especially when it comes to emissions of particulate matter.

But diesel fuel has changed, too. The GAO reports that newer, so-called "cleaner" diesel fuels are "eroding the advantages in emission performance that alternative heavy-fuel engines [such as CNG] offer."

"Diesel buses have become significantly cleaner over the past 11 years," the report continues. "According to some transportation industry experts, it appears that these dramatic improvements in the emission performance of diesel engines will continue into the next decade."

Not surprisingly, environmentalists and other proponents of CNG buses scoff at the notion of calling diesel fuel "clean," no matter how much it's improved over the last decade. "I have seen no evidence that there is any such thing as clean diesel," says Erin Russell, the Clean Cities coordinator for the Earth Day Coalition, a local environmental organization that studies air quality issues. "The soot, the particulate matter, that one of these diesel buses puts out is as much as 80 cars."

The federal Environmental Protection Agency has found that high concentrations of particulate matter significantly increase the risk of developing everything from asthma to chronic bronchitis, while the World Health Organization claims particulate matter is responsible for a half-million premature deaths per year. Recently, particulate matter from diesel engines was classified as a toxic air contaminant by the California Air Resource Board.

And while CNG buses may be more expensive, argues Russell, both the reliability and the costs involved are improving. Over the last several years, she says, CNG technology "has gotten better by an order of magnitude."

For RTA's York, the tradeoffs are more complex than a simple choice between a healthy environment and fiscal responsibility, or CNG vs. diesel technology. Advances in new alternative fuel technology will likely make other options available before long. And for the moment, buying more expensive vehicles could mean less money to offer other mass-transit opportunities and entice people out of their cars, the source of most air pollution.

In short, the question isn't whether to help clean up the environment. It's how best to. "RTA can't answer that question," says York. "But people don't want to hear that."