Blowout at the Bomb Shelter

From log cabins to libraries, Stepsister spills its white-trash pride over any stage it can find. 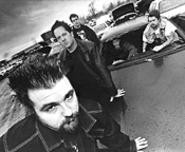 Stepsister bassist Tony Erba has about as much use for subtlety and grace as the beefy wrestlers who have transfixed him on a recent Monday night.

"We don't know dog dick about higher art," Erba says in the living room of his West Side home, where he and his bandmates are taking in some WWF action. "People who are on a higher plane think we're a bunch of jerks. 'Those guys are overweight plumbers. They look like they just got done hanging drywall.' Goddamn right. I climb a telephone pole for eight hours; now I'm going to play so fuckin' loud, so fuckin' fast, and so goddamn honest and cheap for you motherfuckers -- then come up to me with your snide remarks or your goddamn hipster attitude. That's the whole concept behind this band."

And it's a simple one, as bare-knuckled and uncouth as all the grappling taking place on the TV. Maybe that's what attracts these dudes to the much-maligned amusement -- because it's sniveled at for the base, unrefined thrills it provides. Just like Stepsister. Maybe that's why the band's practice space in Erba's basement is lined with old wrestling placards, why he is an avid collector of gnarly, stomach-turning wrestling tapes, and why he's even gone so far as to name his cat Blassie -- after "Classy" Freddie Blassie, the old-school wrestling thug. It's not that Erba and his band are cultural cretins; it's just that they appreciate the value of no-nonsense entertainment and have taken it upon themselves to create some of their own.

"We want to be a populist, working-class band," he says. "We want to play nasty, raunchy, blue-collar rock and roll to fuckin' working-class assholes who want to fuckin' go to a club, see a band that plays for a low ticket price, brings an assload of amps in, says 'motherfucker' and 'get down' a lot onstage, and fuckin' plays 50 minutes of ass-kicking punk rock and roll with no fuckin' attitude. It's pretty obvious from looking at us that there's no ulterior motives. With the exception of Scott [Eakin] and Tom [Dark], we're not attractive people."

Grizzled is more like it. Erba and Dark have been vets of the Cleveland rock underground since the mid-'80s, toiling in once-prominent acts like Knife Dance and Face Value. They work long hours at day jobs -- Dark is a grocery store manager, Erba a cable guy -- and have an indefatigable air about them. It's manifested onstage in Dark's angry-dad hollering and Erba's bass lines, thick as the greasy mustache of his hero, Lemmy Kilmister. They're flanked by Eakin -- Dark's brother, who also played in Knife Dance -- and guitarist Aaron Dowell, forming a quartet with decades of hard touring and harder rock and roll under its belt.

"I had a 1.1 grade average in high school, so I think riding in a van pretty much suits my career," Dowell says with a laugh.

With its current lineup intact since July 2000, the band has steadily built a small but loyal following and upped the ante on piledriving rock in Cleveland.

"We started doing things on our own, booking our own shows, playing the Mantis, the Revolution, and slowly but surely, other bands caught on," Erba says. "We got to play with the hip bands and stuff, but we kind of sensed a bit of snobbery. So we decided to take that and turn it into a positive; like, we're going to celebrate our retarded, fuckin' populist appeal, and we'll do this white-trash thing."

Hence the band's upcoming two-night stand at the Revolution, which Stepsister has dubbed the "White Trash Explosion Weekend." Put together to celebrate the release of the group's latest, Autopilot Stuck On: Get Down! (Smog Veil), the event will feature free Aldi macaroni-and-cheese dinners, 50-cent cans of P.O.C., a séance for nasty rocker G.G. Allin, a Princess of Parma contest, and a hefty lineup of take-no-shit bands, from local bruisers the Vacancies and the Crash of '59 to violence-prone Detroit brawlers the Bump N' Uglies, who spike their sets with full-on wrestling matches that inevitably lead to lots of broken furniture. They even bring a referee with them.

"Basically, we're just going to come out and drop the hammer as far as the rock goes, maybe bust a couple of heads, break a couple of tables," says Amado "The Natural" Movado, singer/ guitarist for the Uglies.

"If the place is still standing at the end of the weekend, I'd be surprised," adds Doug McKean, bassist/vocalist for Cleveland street punks the GC5, which will headline the first night of the fest.

If the whole affair sounds like mayhem, well, most Stepsister shows teem with it. The band has made a point of playing out-of-the-way places under the most trying circumstances. It's performed at bomb shelters in Boston, shacks in rural Vermont, and kitchens and basements the country over.

"Don't come to us, we'll come to you," Dark says. "We went to Mansfield and played in this small little log cabin. Some bands would be like 'We're not playing that.' But if we get the call, we'll go."

Most recently, Stepsister performed at a library in Lexington, Kentucky.

"The other time we went down to Kentucky, it was a dry country town called Somerset in the middle of nowhere. It was like 45 minutes outside of Knoxville," Erba says. "These motherfuckers acted like it was the Ramones coming down and playing, they were so excited. It was awesome. I think there's a lot of bands that are getting a lot of run that won't go out and do those kinds of gigs, because it's beneath them. Fuck that. We'll go out and play libraries, taco stands, print shops, wherever the fuck. Yeah, we'll play a show at Peabody's, but we'll also play Billy's goddamned bar mitzvah."

"Then they get to see Tony break a beer bottle over his head, his head's bleeding, he's running around naked, and they never forget it," Dowell adds.

And that's the difference between these guys and their wrestling heroes. Here, the blood's real.