With Brickhouse Blues Band. Saturday, August 19, at the Beachland Ballroom. 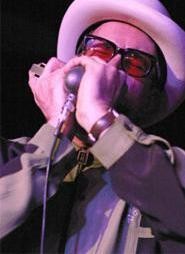 Few musical instruments are as closely associated with a single genre as the harmonica is with the blues. The harp's portability and distinctly vocal character have made it a mainstay from the rural beginnings of the blues to its postwar urban heyday and beyond. Since the early '90s, veteran Bay Area harper Mark Hummel has made it his business to showcase the very best of present-day players by way of his touring Blowout shows.

In the current lineup, the artist most widely known outside the blues world would be the J. Geils Band's Magic Dick. His feature "Whammer Jammer" was a staple of that band's concert sets and has become a harp standard ever since. Jerry Portnoy followed numerous legends as the harmonica man in Muddy Waters' band in the '70s and later drew raves on Eric Clapton's From the Cradle CD and tour. Danish-born Lee Oskar provided the '70s L.A. R&B supergroup War with some of its most distinctive sounds. Hummel himself is a master of the Chicago-meets-swing fusion that defines the West Coast blues school. His Blues Survivors provide the backup for this bash.