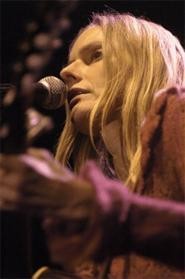 Rust Records has signed Blush, giving the band a second shot at national prominence. The Canton band formed in 2001, signed to Surfdog Records the following year, recorded an album with Incubus producer Jim Wirt, headlined Tony Hawk's Birdhouse Skateboard Tour, and ultimately got lost in the shuffle. Its debut disc found the young group -- which included 18-year-old singer Mary Cushman and her three brothers -- caught between its natural inclination to rock and the label's desire for a female-fronted pop act.

"This [new] record has that indie-rock/CMJ vibe, combined with a mainstream appeal," says Rust Executive Vice President Ken Cooper. "And Mary has a great voice. I'd say it sounds like Queens of the Stone Age, with a female singer."

Blush's sophomore album, titled From Falls to the Path, is set for release March 7. The band recorded it in late 2004, with Bill Korecky (Integrity, Mushroomhead) at Mars Studios in Streetsboro. Cooper says the deal is for one album, with an option on another. Initial plans are to press 5,000 discs and distribute 600-700 promotional copies. Rust is part of Universal's Fontana network, the indie-oriented arm of the largest major record company.

Rust's roster now includes 18 bands, four of which are handled by its Nashville satellite office. Cooper says the label plans to release 20 albums in 2006. Rust has just signed PovertyNeck Hillbillies, a Pittsburgh septet with a respectable presence in national roots-rock circles. The label has also inked a deal with New Philadelphia's Panic Scene, which Cooper describes as "Morrissey meets the Clash."

· Fast Chester's "Forbidden Fruit" is now featured in the free compilation that accompanies this month's Brave Words & Bloody Knuckles. The Cleveland hard-rock band is now working on its third full-length CD, shooting for a spring release.

· RockMe TV will tape a Saturday, February 11 show at the Phantasy Nite Club (11802 Detroit Avenue, Lakewood) featuring Morality Check, Burning Karma, Karma Has Kelly, and other hard-rock and punk bands. The show will be available online at www.rockmetv.com.

· Third Eye Entertainment and Teen Club will host the Cleveland Icon Perseverance Awards Sunday, February 12, at the Agora Ballroom (5000 Euclid Avenue). From 2 to 4 p.m., the event will honor Cleveland music figures including Michael Stanley, Henry Lo Conti (of the Agora), and Steve Popovich (Cleveland International Records). The awards will be followed by a show featuring Prayer Warriors, Way of Love, and Jackie.