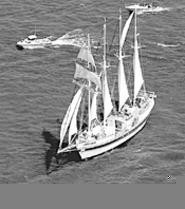 To open the North Coast Harbor Boating, Fishing & Seafood Fest on Friday morning, Captain Bob Marthai of Chicago will pit his Windy II against the schooner Roseway in a mock "tall-ship invasion." "We'll invade, raid, and pillage," jokes Marthai, a Cleveland native who sails the 150-foot barquentine to teach maritime history at festivals around the Great Lakes.

Throughout the weekend, Marthai will take passengers on one-and-a-half-hour tours of Lake Erie. "We'll make them haul the sails up," he says. "Once we clear traffic, they can come up to the helm and take a trick at the wheel."

But it's not all work for armchair sailors. Behind the Rock and Roll Hall of Fame, there will be a fishing pond for kids, powerboat exhibits, and seafood chefs dishing up Maine lobster, perch, and clams. For Marthai, the centerpiece will be the tall ships. "They're the epitome of independence," he says. "Once we leave the dock, we're in our own little world, making these boats move just by our bare hands." The fest happens from 11 a.m. to 8 p.m. Friday and Saturday, and 11 a.m. to 5 p.m. Sunday at Voinovich Park (at the foot of East 9th Street). Admission is free, but boat rides are $25, $20 for kids. Call 440-899-5009 for more information. -- Cris Glaser

Here's one for a game of astronomical Trivial Pursuit: If you could travel at 32,000 miles an hour in a spaceship, it would take 88,000 years to reach the star closest to the sun. Or you could just stand in the Geauga County Park District and see it through a high-powered telescope at Astronomy Night in the Park, hosted by the Chagrin Valley Astronomical Society. If there aren't too many clouds in the night sky, stargazers will be able to see gaseous nebulae, a crescent moon, and the planets Venus, Jupiter, and Saturn lined up like nocturnal soldiers from 9:30 to 11:30 p.m. Friday at the Rookery's Great Blue Heron Lodge, 10110 Cedar Road in Munson Township. Admission is free, but registration is required; call 440-286-9516. -- Cris Glaser