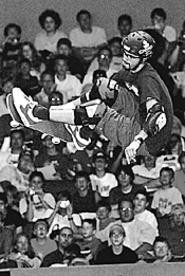 Bob Burnquist is a self-anointed "trickmonster," one of 15 world-class skateboarders and BMX bikers amping the ramps for Tony Hawk's Boom Boom HuckJam. The show is a carnival-on-wheels, complete with a million-dollar ramp system and a mammoth half-pipe encircled by a Motocross track. "This is something totally different than Gravity Games," Burnquist says of the show, which bears the name of skateboarding's premier air carver. "Everyone gets a cut, and they know they're cued on what they need to do."

That sums up the HuckJam's formula. It's a performance, and all the stunts are timed, synchronized, and scripted to old-school punk tunes spun on tables manned by the Anarchy Orchestra crew. "It's such a cool environment, with great music and the best bikers and skaters in the world, feeding off each other's energy," says Mat Hoffman, who holds 10 world BMX vert titles. "It pulls the best tricks out of everyone."

You don't have to tell that to Burnquist. A pioneer at "switch-stance" (HuckJam parlance for leading with the opposite foot), he'll show off his daredevil side on the Loop of Death, a Hot Wheels-like ramp that launches him on a four-second, 360-degree ride. "I prefer to call it the Loop of Life, because I like living through it," he jokes. "Tony's been dreading it, but if anything, he knows I can do it."

Take that as a hearty pat on the back for the 26-year-old Burnquist, who came to the U.S. from his native Brazil when he was 18. After joining Hawk on the Las Vegas stop of last year's tour, he was invited to tag along for this year's entire seven-week run. "There are things that I know I can do that haven't been done before," Burnquist says. "You just go out and do it, and say to yourself, Wow! How did you think of this?"