Bond in a Bikini

July 05, 2006
comment
The Matador Doctor Who: The First Season Firecracker The Libertine 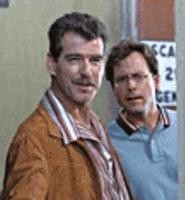 The Matador (Weinstein)
Richard Shepard's spec script, sent to Pierce Brosnan's production company out of desperation, wound up as 2005's best buddy pic -- damned if I can recall a funnier movie from last year, except the one with the middle-aged virgin. Brosnan, not afraid to don cheerleading skirts and black bikini briefs, is a down-on-his-luck hit man who befriends Greg Kinnear's middlebrow businessman during a trip to Mexico. One minute Brosnan's talking about south-of-the-border cocktails and cock, the next both men are planning to take one life to save another. Just as charming is Hope Davis as the understanding wife who digs a late-night tango with a killer. The disc's deleted scenes fill in one or two head-scratching blanks, while the doc and commentary with stars and director suggest a margarita-fueled camaraderie that spilled well outside the frame. -- Robert Wilonsky

Doctor Who: The First Season (BBC)
Hate to sound heretical, but I never much cared for Tom Baker's long-running Doctor Who. Something about British sci-fi always seemed a little, well, cheesy. (Maybe it was the sets that looked as if they fell off a middle-school auditorium stage.) But this updated version, with Christopher Eccleston (24 Hour Party People) as the ninth actor to play the part of the time-traveler out of time, is properly engaging; might have something to do with the fancier effects and catchier music and better acting (nothing against Peter Cushing or Baker, actually) -- or the fact that for the first time, it doesn't play like a Monty Python version of a space opera. This collection includes all of the Eccleston episodes, in addition to numerous docs and et ceteras inevitable on a 500-plus-minute collection. -- Wilonsky

Firecracker (Dikenga)
In a near-perfect opening shot, people on a quiet suburban street break into a sudden run toward a backyard shed that holds something horrifying. Nothing else in this indie crime drama lives up to that moment, but director Steve Balderson sure gives it a shot. Supposedly based on a true story, the film tracks the relationship between a small Kansas town and a traveling circus. Balderson, like his hero David Lynch, uses a lot of tricks that in lesser hands would be pretentious: Scenes switch between black-and-white and lush color, actors play dual roles. Problem is, Balderson himself occasionally reveals a lesser hand, and while Karen Black handles her roles brilliantly, Mike Patton (of Faith No More) is more enthusiastic than talented. Still, there are enough breathtaking moments to make the missteps worth sitting through. Artists like Lynch usually inspire followers to make unwatchable garbage. It's nice to see someone pull it off. -- Jordan Harper

The Libertine (Weinstein)
Scheduled for release a dozen times last year till it was finally dumped in March, this bit of buggery and buffoonery allows Johnny Depp one more chance to trot out the English accent that wouldn't pass acting class. Directed by a music-video maker with a thing for mud, rats, and tits, everything about this hazy biopic on the boozed-up, sexed-up Earl of Rochester suggests it's a put-on and nothing more. The deleted scenes make it seem that not only the Earl was in the tank during shooting; the documentary, more fartsy than artsy, does provide the tidbit that John Malkovich (here playing King Charles II) originally portrayed the Earl onstage. Woulda loved to have seen that just once. This, never again. -- Wilonsky