After 20 years of label rule, Fishbone prepares to do things its way. 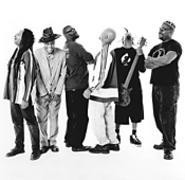 Norwood Fisher has all the symptoms of a man who is delighted to be alive. The bassist and founding member of the L.A. ska/funk/soul/punk collective Fishbone is audibly weary as the band continues its full-bore, coast-to-coast tour, but there is an underlying joy in his voice that can't be denied.

"It's a rockin'-ass show," Fisher says of Fishbone's latest stage extravaganza. "It's kind of different now. We rehearsed! Like three times the week that we went out, and the week before we left, too. It's weird. Everybody is really good musicians, and if we practice too much, it gets too tight. So we just keep it real. But we practiced this time, so we're really good now. We know more songs. We play really different sets every night."

That new approach to their music may have been fueled by the fact that half of Fishbone's members have been playing with the band for only the past five years, making it difficult to dip too far into the band's sizable, wildly unpredictable catalog, which dates back to 1983's eponymous debut EP.

"There's one thing that we were conscious of from the beginning, and that was that there was an easy road and a hard road," Fisher says with a laugh. "We didn't know what it would look like, but we knew that it might not be that easy, being who we were setting out to be, but it pays off so deeply in the creative aspects. For us, right now, we're just thankful to be able to come out and entertain people. I've been in the game a long time, and there are a lot of bands that are not around."

At many junctures throughout its long and tumultuous existence, however, Fishbone could very well have become one of those bands that are no longer around. With a history that will ultimately demand a book to detail its intricacies, Fishbone has feverishly danced on the edge of fate dozens of times and lived to tell the tale. But not without opening a fair number of wounds in the process.

The core group met in junior high in Los Angeles in 1978 and developed its unique blend of ska, funk, and blistering rock over the next five years. It signed with Columbia and released a series of explosive albums and EPs that were critically acclaimed yet commercially disappointing, largely because of the label's inability to understand Fishbone's demographic and the band's unwillingness to commit to a single cohesive sound.

Along the way, Fishbone trudged through the psychic battleground that has come to define the band. Guitarist Kendall Jones experienced a religious conversion/nervous breakdown, which prompted the band to intervene, ultimately leading to Jones leaving the band and suing Fisher for his involvement in the intervention (Fisher was charged with attempted kidnapping, but was later cleared). Keyboardist Chris Dowd left shortly after Jones's departure, and Fisher's brother Philip ("Fish"), the band's exuberant and dead-solid drummer, split contentiously from the band in 1996 after a dispute about a proposed appearance on a ska radio program. To top it all off, guitarist John Bigham, frustrated by Fishbone's lack of direction, departed to pursue solo ventures.

With the absence of four members, two of whom had been primary songwriters, Fishbone found itself teetering on the brink. Recruiting guitarist Spacey-T (Mother's Finest), keyboardist John McKnight (Ben Harper), and drummer John Steward (from Fishbone side project Trulio Disgracias), the band began to focus on a more tangible sound, which resulted in last year's incredible Psychotic Friends Nuttwerx, its debut for Hollywood Records. Yet even in triumph, there were points of contention. Hollywood, a Disney company, took offense at some of Fishbone's more raucous and raunchy contributions to the album, and significant changes were made. In light of Hollywood's similarly confused promotion of Psychotic Friends Nuttwerx, Fishbone has since cut its ties to the label and started its own Nut Factor 5 Records.

As Fishbone experiences real self-determination for the first time, 2002 could be the most successful year of the band's career. The troupe filmed and recorded two nights at Santa Monica's Temple Bar last summer for a project called Everything Went Nutz, and its first release on Nut Factor 5 will be a live album composed of all new material presented at the shows. Fishbone is starting the year with a preview EP (featuring Blowfly and other friends), followed by the live album, before it begins work on a new studio record. This year may also see the release of Phoenix Point, a post-apocalyptic movie in which singer/sax player Angelo Moore plays a demented preacher, Fisher plays a cannibal, and both contribute to the soundtrack.

"We've been active over the years, and right now's about the time when it's all about to blossom into the full creation of the Fishbone extension world," says Fisher. "There's mistakes that we've made, and life is kinda wild. We live in a world that is not a utopia, and it's like that for everybody. I'm just glad to be able to do these things.

"Even if we wasn't putting out our own records, which I'm really happy and proud of, just the simple fact that we can tour is amazing. And I'm thankful for it. Our audience is hardcore, they're just rocking to the band and staying all night, for all three hours. It feels like it's all the right things to be doing."