Monsters, Inc. opens the door to a world so good, it's scary. 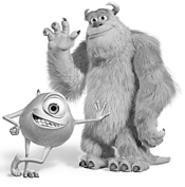 As the year winds down, breathlessly and apprehensively, the most anxiously awaited releases left on the schedule offer nothing less than whimsy and reveries. We've had enough of the real world, for now, so we look forward to leaving it behind and joining the company of Harry Potter, Frodo Baggins, and other fairy-tale creations, seeking sorcerer's stones and supernatural jewelry. Lord of the Rings: Fellowship of the Rings and Harry Potter will no doubt join Shrek atop the list of the year's most profitable films, as audiences head to multiplexes to lose themselves in fantasy worlds unscathed by headlines and untouched by televised horror; there will be no need to digitally alter skylines, to pretend yesterday never happened. We crave an escape, a looking glass though which we can disappear -- a door to a happier, shinier, prettier place.

Monsters, Inc., the latest offering from the Pixar folks responsible for the Toy Story films and A Bug's Life, provides such an entry point. The film posits that behind every child's closet door is a portal to a world inhabited by monsters, all of whom work for a corporation that provides energy for a city named Monstropolis; the place looks like Manhattan if it were populated by Maurice Sendak creations. At Monsters, Inc., their motto is, "We scare because we care," but the company, in the Waternoose family for generations, is in trouble. Screams, the source of "clean energy," are in short supply: Children are becoming inured to their brand of antiquated horrors, and the city's in danger of suffering rolling blackouts. "We've lost 58 doors this week," grouses one ogre. "Kids don't scare like they used to."

For the creatures -- blobs with a dozen eyes, furballs with fangs the size of elephants' tusks, lizards with spiders' legs -- in the employ of Monsters, Inc., scaring is quite literally a job. They punch in, fill their yellow canisters with screams, meet their quotas, and vie for the title of Scarer of the Month -- a position long held by furry blue beastie James P. Sullivan (voiced by John Goodman), a lovable-huggable who bares his fangs only when on the job. Sully's scare assistant is also his best friend and roommate and trainer, Mike Wazowski, a green one-eyed blob with spindly arms and legs and the voice of a Catskills comic (Billy Crystal). It's Mike's job to ensure that Sully isn't overtaken by an oily chameleon named Randall (Steve Buscemi), whose ruthlessness and sloppiness could well lead to the downfall of Monsters, Inc., if not all of Monstropolis.

When they're not working, Mike and Sully are flirting with co-workers (Mike has a thing for a thing with a Medusan 'do, Cecilia, voiced by Jennifer Tilly), shopping at the "grossery store" for Wet Dog deodorant, and hanging out at a swank sushi joint, Harryhausen's, named for the producer of such claymation epics as Clash of the Titans. But their comfortable world is thrown into tumult when a little girl, nicknamed Boo by Sully, crosses over into their world. The monsters believe that the touch of a human is lethal, and if they bring so much as a sock back to their side, decontamination squads from the Child Detection Agency are called in to shave down and irradiate the infected beasts. The sight of germ squads in yellow biohazard suits is the film's sole touch of realism, a case of unfortunate timing.

Sully, the soft touch, sort of adopts Boo. To him, she's as much pet as child, as much a source of amusement as possible font of lethal contagions; to her, Sully is nothing more than an overgrown kitty. (In the film's most touching scene, Boo's horrified to discover her newfound pal is indeed a Top Scarer in the corporation; it's to the movie's estimable credit that it can cajole a tear or two in between laughs without pandering or playing dumb.) As much as the frantic Mike wants to ship the kid back to her world -- he initially considers the cuddly, burbling little girl, voiced by Mary Gibbs, a "killing machine" -- Sully wants to keep the child, whose laughs are more potent than screams. But she's in as much jeopardy as the monsters: Boo is to be Randall's guinea pig in a horrific experiment that could save the company but devastate all childkind.

Monsters, Inc., co-directed by Peter Docter, David Silverman, and Lee Unkrich, makes the first Toy Story look like Steamboat Willie. It's visually breathtaking, but not overbearingly so; it doesn't beg you to be gee-whiz impressed, unlike Final Fantasy: The Spirits Within. And it tells a compelling, complex story more tangible and emotional than any live-action film released by a major studio this year; if Shrek is all surface, a one-note pop-culture riff masquerading as fractured fairy tale, then Monsters, Inc. is a joyous dip in the deep end. The subtext allows for myriad interpretations: It's about prejudice, office politics, alienation, and not least of all, the power a laugh holds over a scream. Monsters, Inc. is as giddy and antic as any great Warner Bros. cartoon of the 1930s and '40s -- it bears seeing more than once, if only to allow for the sight gags that play second fiddle to the plot, a rarity in animation -- but also resonant and real. In other words, it's the perfect movie.