Julia Roberts fights injustice while trying to keep her top on. 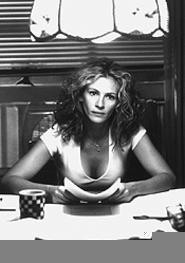 The film is called Erin Brockovich, but it might as well be titled Julia Roberts. Never before in the actress's erratic career has a film been so custom-made for her; it's as though a screenwriter has been replaced by a seamstress who knows Roberts's every curve. No matter that she plays an out-of-work single mother unable to pay even the phone bill, a woman so crude she can't help but shout epithets from a witness stand. No matter how much talk about hexavalent chromium and DNA mutations and horrific cancers we're forced to endure. There's still no transcending the obvious: This is a Julia Roberts movie about only one thing -- being a Julia Roberts movie.

It's as though the entirety of her career has built to this single film, this glamorously "unglamorous" role in a movie (based on a true story) about one down-on-her-luck, self-educated woman's hard-fought triumph over adversity and evil. Everything before Erin Brockovich led us here, from the college-student-turned-investigator in The Pelican Brief to the hotshot reporter in I Love Trouble to the disbelieving Justice Department official in Conspiracy Theory. Only here, there's no one to get in her way -- no Denzel Washington or Nick Nolte or Mel Gibson with whom she must share the $20-million payday. Erin Brockovich is all hers -- Roberts's solo album.

Certainly, she deserves as much. She has proven she can carry a movie, but it's not difficult when there's usually so little heavy lifting involved. She has become a star almost in spite of the material given to her; the woman will make anything, even if it involves her kissing Woody Allen. If nothing else, Roberts confirms that charm, panache, and a blinding smile will outclass even the most pedestrian moviemaking. Not that Erin Brockovich is prosaic cinema -- it's just that Erin Brockovich might as well have been made without a director. It's the first Steven Soderbergh film to smack of work-for-hire. It's a letdown after Out of Sight and The Limey, an overlong and earnest whimper after two rollicking blasts. Replace Julia Roberts with co-star Marg Helgenberger, and you've got what amounts to made-for-Lifetime uplift: out-of-work, twice-divorced single mother takes on The Man and knocks him on his ass to the tune of $333 million. Think A Civil Action with cleavage.

Soderbergh, working from a script by Susannah Grant (Ever After, Pocahontas) and an uncredited Richard LaGravenese, establishes from the very beginning what a long, torturous climb lies ahead for our perky, persistent heroine. When first we see Erin, looking like a hooker who shops at J. Crew, she's nearly begging a doctor for work in his office. But she's unqualified: Her medical knowledge is limited to the illnesses her three young children have contracted. The doctor turns her out into the street, where her car sits with a parking ticket on the windshield. As if that weren't bad enough, she breaks a nail. And then she's blindsided not 30 feet from her parking space. Things can only get better, right?

But Erin's lawyer, Ed Masry (Albert Finney, looking as though someone left him in the rain a little too long), is already one step out the door. He's an old man awaiting retirement; Ed's exhausted, going broke, and finished with law. Erin's nothing but a pain in the ass to him, and he sells her short: Her inevitable payday turns out to be a bust. So Erin demands Ed make it up to her by giving her a job, which he initially refuses to do, insisting he's all staffed up. "Bullshit," she snarls. Ed's too worn-down to argue with her -- and he's a little too turned on by this firestorm not to give her a job filing away old cases. He, like everyone else in the film and in the audience, can't stop staring at her breasts, which she wears the way other women wear diamond pendants.

Inevitably, Erin discovers some medical records in a real-estate filing. Ed can't explain what they're doing there, so she begins to investigate on her own. She discovers the expected: In a small California town called Hinkley, Pacific Gas & Electric is poisoning its citizens with something called hexavalent chromium, which has seeped into the town's water supply and is causing lethal genetic mutations in the town's residents. The town, of course, is hardly aware of such malevolence: Donna Jensen (Helgenberger, playing June Cleaver in a trailer park) and her family, the first of more than 600 contacted by Erin, believe PG&E would never do anything to destroy Hinkley. Why? Because PG&E told them so.

Caught in the middle of all this are Erin's kids, whom she has left in the care of next-door neighbor George (Aaron Eckhart), a shaggy Harley rider who works construction when he wants to -- which, in this case, isn't at all. George and Erin begin a sort of accidental romance: He genuinely cares for her kids and asks nothing in return when he begins babysitting for Erin. That they fall in love (or whatever -- the terms of their romance are never quite laid out) is inevitable. They're drawn to each other because both of them have run out of options. George is at once the perfect man and the louse-in-waiting: He wants all of Erin, not just for himself but for her children, whom she has ignored in order to attain the deference that's always been far out of her reach.

To the film's credit, Erin's investigation often feels beside the point. This is less a film about exacting justice than it is a film about a film about exacting justice. It's as though Soderbergh and Grant know there's no way to tell this story without commenting on its familiarity (no, its obviousness) or almost apologizing for its truth-is-better-than-fiction, fairy-tale ending. So they undercut every moment of tension with a smart laugh, a wry punch line -- almost all of which are about Erin's tits. It's effective to a point, but the film begins to lose momentum by the end, just around the time Erin tells Kurt Potter (a smarmy Peter Coyote, as though there's any other kind), a lawyer Ed's brought in to assist with the case, that the only reason she got this far is because "I just went over and performed 634 sexual favors, and boy, am I tired." Sit through this, and you'll know a little of how she feels.