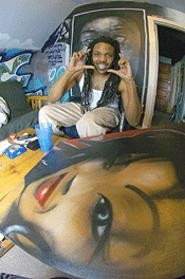 Iyan Anomolie's mind is probably a lot like his crib. Hip-hop bumps gently in the background, and the attic apartment is covered in graffiti by some of the area's notable graff artists -- Prayer, Savage, Analog, and Anomolie himself -- who have filled its walls with rainbow signatures, spray-painting bulging letters the size of basketballs. The rhymer-painter sits at his control center, dozens of dreads hanging to his chest, clicking a MacIntosh keyboard, working on his website.

Seated under a landscape of jagged mountain peaks and a crimson sunset, Anomolie is trying to post the video for "Bombin'," a de facto single from his latest album, The Book of I. Filled with footage of Anomolie's long journey from Cleveland and back again, the Quicktime file cuts from Anomolie to spray-painted walls, trains, and breasts in Chicago, Philly, and Cleveland's Red Line. In a shout-along chorus, Anomolie rhymes, "Taggin'/Bombin'/Burnin' down/ Graff writers worldwide/Gettin' around." Over a big beat and bouncing piano sample, he declares himself an "MC like Escher." In most independent hip-hop, the songs are at least a minute longer than they need to be. The guerrilla-art anthem is a quick blast.

"I learned that the hard way," he says, rolling a thin, unlit Middleton Black & Mild cigar between his fingers, recalling his former crew Espionage. "With Espionage, our songs were eternal. It was like, I'll do my verse, which is 85 bars, then you do yours, which is 85 bars. Then we'll throw a hook in, and do 85 bars. And the beats weren't hittin'. I had to spend months figuring out song structure, how to develop a song. A bad song always lasts a really long time. A good song, you want more."

If Espionage were still in effect, it would be a Cleveland hip-hop supergroup. From 1997 to 2000, Anomolie ran with rhymer Saj Supreme and DJ Mick Boogie, practicing excessive lyricism over spare beats. After Espionage, he became the resident deep thinker and illustrator of Twelve Monkeys, a progressive hip-hop collective featuring Spittin Image, Edotkom, Rime Royal, and others. At its height, the crew combined its efforts to record tight albums and sell out shows in Cleveland and Akron. College grads and street rhymers united, trying to do something different because, Anomolie says, rap has too much of the same beats, the same rhymes.

"Lil Wayne, Mike Jones, Juvenile, that's straight rap," he says. "When Juvenile and Mystikal fell off, nobody cared. But people still say, 'Damn, KRS-One fell off,' like they're disappointed. I still remember the first time I heard the first Nas album. I was like, 'This is great. This is the best shit ever.'

"You know what you're going to get when you listen to a rap album," he continues. "It's all 'bitches' and 'ho's'. Hip-hop has substance. Hip-hop has so many shades and colors. There's bling in underground hip-hop. And I'm not saying that I'm above talking about guns, but if I do, I'll say something like 'You blast guns, I fire rockets.' It's creative. Rap is dumbed-down music. You don't have to think about shit. Talking about rims is not thought-provoking."

Always on the prowl for stimulating conversation, the Shaker Heights native graduated from Philadelphia's University of the Arts with a bachelor of fine arts degree in film and video production and a minor in art education. In Philly, he interned at the Roots' hip-hop portal Okayplayer.com, where he crossed paths with Dead Prez and Talib Kweli. Inspired and educated, he brought his knowledge home and put it to work.

On 2002's Kinetic Potential, the young rhymer's high-pitched voice and complex rhyme schemes created comparisons to Eminem. On the new The Book of I, his voice is deeper, his tongue just as nimble. Hook-filled cuts flow into each other between instrumental interludes and skits that are actually funny. Anomolie brags about the size of his brain, recalls doomed relationships, praises education, and sweats whether he's working hard enough to reach his potential. Like Kanye West's College Dropout, the college graduate's latest disc takes an accessible approach to underground hip-hop.

The Book of I dropped late last year and quickly moved 200 copies in the Cleveland area. Over the spring and summer, Anomolie will play shows from Boston to D.C. He plans to make a hard push, barnstorming from Minneapolis to Philly, a box of CDs under each arm. He wants to retire to the Bahamas, but he's not sure how he'll get there.

Anomolie knows that he can't put Cleveland hip-hop on the map by staying here. The city has no shortage of hip-hop fans, but most of them come out only to see national acts. Not that they have many opportunities to see local artists. The city hosts 20 rock shows in any given week, but in a good month, it has only two hip-hop shows. Anomolie makes his shows memorable, old-school-style showcases, filling the room with oversized framed graffiti canvases, B-boy battles, and break DJs. The people that do show up have a good time.

"I hate to say it, but the core audience in Cleveland hip-hop is the audience," Anomolie says. "The group of kids who like hip-hop are it. I see a lot of young white kids at hip-hop shows. And I see very few black people of my age. I don't know where all the older hip-hop cats are. Everyone who came out for the L.L. and Nas shows -- please come to my shows."