Frank and the boys tip a few in The Rat Pack at Playhouse Square Center. 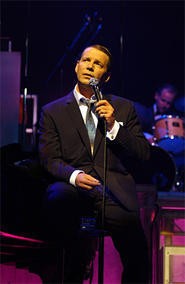 In the annals of show business, there has probably been only one performer whose presence could be communicated by two words on a marquee that said, simply, "He's Here." And that was exactly how Caesars Palace in Las Vegas announced the arrival of Frank Sinatra for an appearance in 1968.

Eight years earlier, Frank had claimed the soul of Glitter Gulch when he and his cronies took the stage at the Sands Hotel and Casino for shows that were the essence of ring-a-ding hipness. And that is the performance that's being recreated on the Palace Theatre stage in The Rat Pack: Live at the Sands. It's a fairly faithful rendering of that bourbon-marinated moment in history, featuring two remarkable impressions that unfortunately have to share the stage with a third performer who is wildly off the mark. But there is still much to savor in this trip back to the pre-Beatles 1960s.

The whole Rat Pack-on-stage idea began with having the cast of the original Ocean's 11, a grade-C heist flick set in Vegas, film its movie scenes during the day and adjourn to the Copa Room in the Sands at night. That's where Frank, Dean Martin, Sammy Davis Jr., Peter Lawford, and Joey Bishop would drink, sing, carouse, drink, and, well, drink -- much to the amusement of pinkie-ring patrons who were lucky enough to get tickets. (During the four-week run, more than 18,000 ticket requests were turned away.)

It was a live party every night, on stage and in the audience, and the air was electric with a magic everyone knew wouldn't last. It's indisputable that these talented folks drank liquor like most of us chug Dasani. And although Dean's intake was probably overstated, he also contributed his share of Black Jack and Chivas empties.

Fortunately, there are no Lawford and Bishop impersonations, their places filled by a three-girl backup group. But the troika of heavy imbibers remains. Dean protests at one point, saying he is not an alcoholic, but a drunk. What's the difference? "As a drunk, I don't have to go to those damn meetings." Of course, all this hooch humor is a throwback to the good old days, before we knew so much about the devastation alcoholism could generate. Other sensitivities are trampled as well, with the perfect girl being described as "deaf, dumb, oversexed, and owns a liquor store."

Sinatra leads off the proceedings with signature tunes such as "Luck Be a Lady" and "I've Got You Under My Skin," taking time to make fun of the late arrivals who inevitably sit up front. As the leader, Stephen Triffitt looks and sounds eerily like Frank, with his skullcap of slick hair nicely capturing the later Sinatra image.

But most importantly, Triffitt has a superb sense of Sinatra's song phrasing, acting the lyrics as much as singing them. His morose and moody rendition of "Angel Eyes" seems lifted straight from Only the Lonely, the classic album for chronic depressives. Whether he's crooning or riffing with his buds, Triffitt has the telltale flat Hoboken accent that made Frankie sound so distinctive. By the time he sings "My Way" at the evening's close, you have the inescapable feeling you've been in the presence of da Man.

Almost as good is David Hayes as Sammy Davis Jr., an irrepressible bundle of nerve clusters who literally bounces across the stage in his eagerness to perform. When Hayes sings the first couple bars of "For Once in a Lifetime," you might swear Sammy had somehow wangled a day pass from God (no doubt with Frank greasing some angel palms) and dropped back among us. Hayes not only possesses Davis' rich tonal quality, he has the nerve to make well-known songs his own by fashioning new beats and pauses. For instance, he morphs an old chestnut like "Mr. Bojangles" into a fresh Sammy Davis version, complete with Bo speaking in character.

Unfortunately, the third member of this woozy trio, Dean Martin, is played by Nigel Casey, who is so far off in his interpretation that blame must go to the casting director and producers, not to the actor. Casey looks suitably Italian, but he butchers virtually every aspect of the Deano vibe. His singing voice is too high, and most of his jokes fall flat, since he never manages to inhabit the warmly tipsy, slightly anarchic Martin manner. And when he delivers his punch lines, his toothy grin is oddly cool and artificial.

But hell, two out of three ain't bad. Rename it An Evening with Frank and Sammy, and it's good to the last whiskey drop.