Boozing through St. Patrick’s Day with Bono, Van, and the Pogues 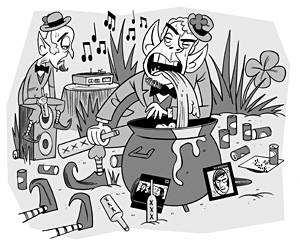 St. Patrick's Day is all about celebrating the Irish. And getting really, really drunk. So we've combined the best of these two wonderful worlds in a 12-hour listening/drinking session that'll get you through the holiday.

Some of the albums on this totally Irish soundtrack run more than an hour; some run less. But just load up your CD-changer or iPod, and it will all work out in the end. Because after about four hours, you'll be too hammered to notice that U2 isn't starting at exactly 4 p.m.

One word of advice, if you plan to improvise at all: You'll want to stay far, far away from the cloying new-age sounds of Clannad and their ilk. You're celebrating, remember? You don't need any Gaelic-speaking granola-eaters to wag their fingers in your face about global warming. In other words, stick to artists who know how to party. St. Patrick would want it that way.

Noon: Snow Patrol, Eyes Open — Let's start with something mellow. You've got another 8 to 18 hours of drinking ahead of you, so you don't want to blow your load too early. These Grey's Anatomy-approved Mom-rockers now call Scotland home, but most of them come from Ireland. "Chasing Cars" was Eyes Open's monster hit, but you'll find that the entire album sets a relaxed tone for a day that'll undoubtedly end up with somebody sprawled out naked on the floor.

1 p.m.: Van Morrison, Astral Weeks — Another laid-back one, but with a tad more bite: Just listen to Van get his pervert on, as he stalks out a 14-year-old girl as she's leaving school. This is the patron saint of Irish music's breakthrough creative statement — an acoustic, revealing work about '60s idealism shot to hell, filtered through Morrison's surrealist tales of transvestites and ballerinas. Goes down real smooth with a pint or six.

2 p.m.: The Undertones, True Confessions (Singles = A's & B's) — Ireland's greatest punk band is a real party-starter, combining power-pop riffs, sing-along choruses, and Feargal Sharkey's quivering voice. True Confessions is a two-CD set, but you have time for only one disc. Go for the first one: "Teenage Kicks," their best song, is there.

3 p.m.: Sinéad O'Connor, I Do Not Want What I Haven't Got — Before she totally freaked out and started making really boring records, O'Connor released two terrific albums. This one — which reached No. 1 — is her best. Her hymnal take on Prince's "Nothing Compares 2 U" was the hit, but nearly every song here clicks. "The Emperor's New Clothes" might even inspire the day's first group dance.

4 p.m.: U2, Achtung Baby — The world's most popular Irish band is all over the place on its seventh album: feedback-drenched rock ("Zoo Station"), shimmering epics ("Who's Gonna Ride Your Wild Horses"), exotic pop ("Mysterious Ways"). It'll suit your state of mind as you enter into hour number five. And feel free to sing along to "One." You're probably ready for it by now.

5 p.m.: Van Morrison, Moondance — Time to bring back Van. His most famous album is stuffed with songs everybody knows: "And It Stoned Me," the title tune, and "Caravan" — one of the all-time great fist-pumpers. Plus, the ballad "Crazy Love" is primed for a little afternoon lovin', if you've still got control of the necessary body parts for such activity.

6 p.m.: My Bloody Valentine, Loveless — This is another band that's based somewhere other than Ireland (see Snow Patrol), but don't waste your time writing us a get-your-facts-straight letter: These London-dwellers came straight outta Dublin. This shoegaze milestone might appear to be a risky choice at this hour, but trust us: Once "Only Shallow"'s guitars kick in, you'll thank us.

7 p.m.: Thin Lizzy, Jailbreak — These old-school rockers have a serious Springsteen jones on their greatest record — which definitely works in their favor. Big, bossy guitar riffs, open-ended songs about fleeting freedom, and the best guitar solos you'll hear all day will keep the party rocking. Besides, you can't go wrong with "The Boys Are Back in Town."

8 p.m.: The Pogues, Rum Sodomy & the Lash — This is what you've been waiting for. Be sure to take a pee break before this one starts, because once the first frenzied notes of "The Sick Bed of Cúchulainn" fire up, you won't want to leave. This is also a good chance to work off all the beer pounds you've put on over the past eight hours, since your entire body will get a workout. Just be sure to put down that glass of Guinness before you start catapulting off furniture.

9 p.m.: The Pogues, If I Should Fall From Grace With God — You'll want to keep the rowdy festivities going. If you haven't puked up that corned beef and cabbage by now, you're probably set for the rest of the night. Bonus points: The best Christmas song ever, "Fairytale of New York," is on this album. It'll have you and your pals drunkenly trying to figure out just how many days are left till Christmas.

10 p.m.: The Frames, The Cost — Time to start coming down. You've been drinking for a solid 10 hours, and you have to go to work in the morning. But this isn't exactly comedown music — more like a slow-building descent. The Frames' frontman, Glen Hansard, writes love songs that are swallowed by guitars and spit out anguish. Recent Oscar-winner Hansard starred in the indie film Once last year. It's fantastic. Make a note to rent it when you're sober.

11 p.m.: Damien Rice, 9 — We prefer singer-songwriter Rice's second album, mostly because backing singer Lisa Hannigan has a more prominent role. She mixes Rice's sweet-and-sour with a dash of spice. Plus, "Rootless Tree" includes one of the best-ever fuck-you choruses. It goes like this: "Fuck you, fuck you, fuck you."

Midnight: U2, The Joshua Tree — Yeah, it's an album about America, but it's also U2's masterpiece. And a pensive one at that. So it's a perfect capper to a perfect day of drinking. It starts with the rousing "Where the Streets Have No Name" — just in case you're catching your second or third wind — and ends plaintively with "Mothers of the Disappeared," which oughta put you right where you belong: to sleep.