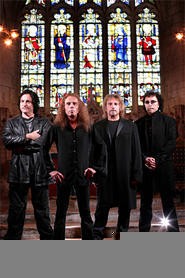 It's knowledge that's the equivalent of a secret handshake: After Sabbath's nasty split with Ozzy in 1979, the band kept making good albums. And even though some would-be fans write off Ronnie James Dio as the model for Spinal Tap-style excess, those with a taste for the hard stuff recognize Dio was the best to follow Ozzy -- if not the best Sabbath singer, period.

"Ronnie James Dio is only underrated by ignorant, closed-minded, non-metal hard-rock fans who have no appreciation, interest, knowledge, or acceptance of this kind of music," says Bill Peters, longtime host of the WJCU show Metal on Metal. "Anyone who has ever loved or liked heavy metal at one point in their life is well aware of the legacy of Ronnie James Dio. He is quite possibly the greatest and most consistent singer ever in heavy metal. Let's also not forget that he trademarked the infamous devil horns/'long live rock and roll' hand sign."

The Dio-era lineup -- which originally put the black in metal from 1980 to 1982 -- has reunited in support of Rhino's new Black Sabbath: The Dio Years compilation. Of course, for the last decade, Tony Iommi and assorted Sabbath alumni had periodically reunited with Ozzy, headlining Ozzfest and playing the same set of classics night after night. But this is the first time in 15 years -- since a brief reunion in 1992 -- that this incarnation of the group, opting to tour under the name Heaven and Hell, has played together.

"All the material we're playing onstage -- it's none of the old stuff. It's none of the Ozzy period," explains Iommi, who still has the Bri'ish accent of a blue-collar bloke from Birmingham. "It's all Dio stuff. If we'd have gone out as Black Sabbath, people'd have been expecting to hear 'Iron Man' and 'War Pigs.'"

Good call. The Ozzy years are truly legendary. Sabbath was arguably the first true metal band, singing about gothic evil over sludgy riffs. Released between 1970 and 1972, its first four albums are universally worshiped by heshers, shoegazers, hipsters, and punks. Over the next six years, however, the band slid from "Sweat Leaf" to "Snowblind," with bad drugs and endless boozing leading to four spotty efforts. But even though Ozzy was in far from peak form when he split, the guy is irreplaceable.

"It can be a no-win situation," says Tim "Ripper" Owens of Dio's circumstances. Currently the frontman for Iced Earth and Beyond Fear, Owens once replaced another legendary metal frontman: Rob Halford of Judas Priest. "The vocals can blow Ozzy away -- it still doesn't matter," he adds. "You're still not going to get the respect."

Then again, Dio did a great job because the band "didn't bring in another Ozzy. They brought in a melodic person who was all over the place -- who had this power to him," explains Owens. "His voice is beautiful one second, and he sounds like the devil another second. I think with Ronnie, the whole albums have better quality, song-wise."

While Ozzy played the regular guy, Dio -- a veteran who'd previously sung for Elf and Ritchie Blackmore's Rainbow -- was a fantastical character who helped establish the swords-and-sorcery imagery as metal archetypes. And don't laugh at those dragons -- Sabbath kept it evil, recording two killer albums: 1980's Heaven and Hell and 1982's Mob Rules. With Dio contributing lyrics, the band stayed in arenas while returning to the underground. On the speedy "Neon Knights," the group goes toe-to-toe with Iron Maiden and Judas Priest, then new leaders of metal who grew up in Sabbath's shadow.

However, Dio's Sabbath didn't just get heavier; it got deeper and wider. With "Heaven and Hell," Iommi took his jazz and blues background to the next level, turning in a solo that's more Santana than satanic. Meanwhile, slow burns like "Die Young" and the instrumental "E5150" affirmed the keyboard's role in metal.

Unfortunately, the group imploded over the mixing of Live Evil, 1982's double-live best-of. Legend has it that Iommi and Dio warred over the mix, supposedly going as far as to sneak into the studio at night to boost their respective levels. Dio split, forming an ongoing self-titled solo band, which headlined arenas in support of albums like 1983's Holy Diver. For Sabbath, five singers followed, and the band faded.

Dio and Iommi buried the hatchet for 1992's Dehumanizer LP, then mounted a well-received tour. But when Ozzy offered Sabbath an opening slot for his "final" solo concerts in '92, Iommi bit and Dio bailed, resuming his solo career.

Assembling The Dio Years has brought them back together for the second time. The band (now featuring drummer Vinny Appice and bedrock bassist Geezer Butler) recorded three new tracks. Dio's lyrics teeter between vintage and the kind of over-the-top sendup you'd expect from Tenacious D. Iommi, of course, still riffs like a dark wizard.

"The show is a lot more serious than when we got out with Ozzy," says Iommi. "That's not to put it down. But where Ozzy throws buckets of water over people and stuff like that -- I don't know where that came from, but it was never part of Sabbath. He obviously got that from his solo stuff. But with Dio, we go out and really love to play, and he loves to sing and make a great job of it."

Read more from Iommi at clevescene.com/blogs.