Tammy Faye Bakker's back, but don't be afraid this time 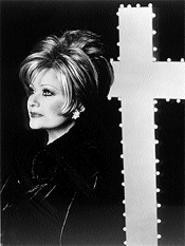 The few seconds between those words and those that follow, uttered by the woman who once haunted pay-to-pray TV like a mascara-ed harlequin, are interminable. Until a month ago, the notion of talking to Tammy Faye Bakker-Messner, once the most adored and reviled figure in the history of television, was unfathomable. So long ago, she was banished from the airwaves, told to take her con-artist husband and bag of flea-market makeup and disappear. She has been little heard of in the 12 years since husband Jim Bakker was disgraced, caught cheating on his wife and stealing hundreds of millions of dollars from his Praise the Lord Network faithful, and she was banished to the acrid nowhere of the California desert. Oh, she might turn up here and there -- on Roseanne's talk show, watched by the faithful dozens, or co-hosting her own ill-fated talk show with the human punch line JM J. Bullock -- but Tammy Faye was, more or less, nothing but an eyeliner smudge on obscurity's dead-end highway. Praise the Lord, indeed: Tammy Faye, gone and most certainly forgotten.

And then, suddenly, she is there -- on the other end of a telephone line, speaking in a squeak familiar even to those who never worshiped at her altar, who never sent her or husband Jim a single dime to build their Christian theme parks and Holy Ghost hotels. It's the sound made by a child's doll when the string is pulled. It is a most unholy echo.

The most amazing thing about our culture is that it allows even the most reviled among us a dozen encores -- death, followed by a bow and a standing ovation. Just when it seemed she was gone for good, Tammy Faye reappears once more -- and this time, on this nation's big screens, the subject of a documentary that presents her not as sinful villain but as sympathetic victim. Like grave-robbers with good fashion sense, Fenton Bailey and Randy Barbato have rescued Tammy Faye from the dung heap of recent history and made her the subject of one of the year's most charming films, The Eyes of Tammy Faye, a movie that engenders pity and not a little admiration in even the most cynical viewer. She is, God bless her, the ultimate survivor.

"I believe yesterday was yesterday, and it's gone," she says, insisting she originally rejected Bailey and Barbato's request to film her life story. "There's nothing you can do about it. It's like an egg that's been smashed on the floor: You can't pick it up and put it back together again. And so you just don't look; you move forward. Yesterday is not your life today, and so it was very hard for me to look back and just remember, you know, just remember the wonderful times. PTL helped millions of people, and millions of people came through PTL. The last time we were there, six million people visited PTL in person. It was the third-largest destination in the U.S.: Disney World, Disneyland, and PTL. There were wonderful, wonderful times there."

The Eyes of Tammy Faye recounts what by now has become a tiny, tear-stained tragedy symptomatic of the go-go greed of the 1980s: the rise and fall of the most famous televangelist in the country, who was sentenced to 45 years in federal prison for committing fraud. It's a coming-of-age story about a little girl from a religious family in International Falls, Minnesota. It's a love story about two Bible-school students who met and married, even though it meant getting expelled. And it's a mystery story, with Charlotte Observer reporter Charles Shepard working to uncover the Bakkers' dirty deeds, leading to their eventual downfall -- all the minister's men. And it's a sad story about the death of a marriage: Jim and Tammy Faye divorced while he was in prison; both have since remarried.

But, more than anything, it's a horror story about how two itinerant messengers of the Lord were continually betrayed by those they believed in: Pat Robertson, whose then-tiny Christian Broadcasting Network aired the Bakkers' puppet show; Paul and Jan Crouch, with whom they founded the Trinity Broadcasting Network and who wrested control from their partners; and, finally, Jerry Falwell, who came in to rescue the Bakkers' PTL Network and refused to return it to its founders. Falwell claimed he was doing God's work; no doubt, the devil made him do it.

"But you have to forgive and move on," says Tammy Faye, and you can hear the smile even over a phone line. Never, not for a second, do you get the sense she says anything she doesn't believe. That, in the end, is what makes her such the sole likeable figure to emerge from a scandal that made a star of Sam Kinison-Howard Stern rubber doll Jessica Hahn and a martyr of a weepy, creepy Jim Bakker. She is honest; she is real.

She chuckles again, the human kewpie doll who has, in recent years, become an icon in the gay community. As the film reminds us, Tammy Faye was the sole member of the televangelist set to embrace AIDS victims on the air, to openly champion gay civil rights. For that, the filmmakers honor her, and we empathize with her. Bailey and Barbato even rounded up the Rev. Mel White, an openly gay minister, to sing her praises: She is, he hints, one of us (perhaps because, with her permanently tattooed eyeliner and lipliner, she looks like a woman dressed as a man dressed as a woman -- the post-modern drag queen).

Narrated by RuPaul and divided into "chapters" that are introduced by hand puppets, The Eyes of Tammy Faye skirts the line between homage and parody; it mocks that which it purports to lovingly celebrate. The film opens with Tammy Faye babbling on about how she collects the eyeglasses of the dead, including her own mother, so they can see through her eyes. It's an eerie and almost laughable moment: This woman's a nut, we think, our long-held prejudices doing her in even before the story begins.

But we then see her wandering through the California desert, trudging through a wasteland where telephone poles jut out of the ground like ancient crosses, and we begin to feel mercy toward Tammy Faye -- a woman crucified for the sins of others, a mother whose two children were humiliated by what Jim had done.

Tammy Faye -- who longs to get back on television "to take advantage of the hurt I've been through to help other people" -- still insists she and Jim did no wrong, claiming they were brought down by government officials frightened that the religious right, in the form of Pat Robertson, might be elected president one day: Disgrace the Bakkers, and the rest will tumble like dominoes. She maintains that theirs was a faithful flock even after Jim was sentenced, and that the Bakkers' only crime was that they "didn't hide anything from anyone, ever." So it's not surprising to discover she had a hard time watching the movie, no matter how flattering its intentions.

"It's interesting to see your whole life flashed before your eyes!" she says, almost screaming into the phone. "Thank God it's all I've done, but when you see it pass before you, it's almost as if it didn't happen to you, because it was almost too much to take in. I laughed, I cried -- more crying than laughing. It brought back wonderful memories, and it brought back pretty sad memories. For three days after I first saw the movie, I was just kind of stunned. My son said he felt the same way about it, that he loved the film. He got sick during the film, because, of course, he was a little boy when all that happened, and this is bringing his whole life back to him again. For three days, he was just totally depressed by looking at what we had watched and how life had changed for him; he said it was like having a hangover. That's what happened to me. I was just sad."

The most astonishing thing about The Eyes of Tammy Faye -- and the voice of Tammy Faye -- is that it converts even the most ardent nonbeliever, until it becomes impossible to mock her any longer. She's suffered enough; time to move on to other, better targets.