Tom Shimura, aka Lyrics Born, is a different kind of rapper -- and a crossover success. 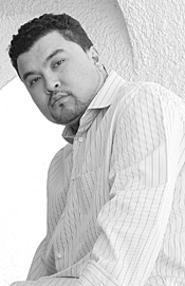 Heard the one about the rapper who lost his pants, but kept his head? The episode took place in April '04 at House of Blues in Los Angeles. It was the second-to-last night of a 27-city "Quannum World" tour, marking the first time since the founding of the artist-owned label that almost its entire roster -- Blackalicious, DJ Shadow, the Lifesavas, DJ D-Sharp, Latyrx, the Maroons, Lateef the Truthspeaker, and Lyrics Born -- stalked the same stage.

Label staffer Lydia Popovich witnessed the incident from a second-floor VIP balcony. The Quannum crew had ordered basketball warm-ups -- jerseys with each artist's name on the back and breakaway pants with button-snaps running up the side -- to give them a uniform look. During his solo set, Lyrics Born -- aka Tom Shimura, the Asian American icon who co-founded the label and has since become its biggest star -- was performing "Do That There," which includes the line "Huge pair of balls/Keep 'em cool under a parasol."

Normally, Popovich says, "Lyrics Born does this huge grandiose move where he mimics having a huge pair of balls with his arms." This time, the rapper's thumb got caught, and he accidentally unsnapped the side buttons of his pants, which proceeded to slowly fall down. "He's prancing around trying to keep going," she recalls. "He makes another gesture, and his pants come completely off. He's standing there, still rapping, completely in his boxer underwear. We see him struggling to maintain composure -- he's laughing and rapping at the same time."

That Shimura was able to laugh at himself is just one indication of what sets him apart from your average dead-serious rapper. In fact, little about his appearance suggests "rap star." He favors basic jeans, nondescript button-down shirts, and generic sweatshirts, and his topics are similarly counterintuitive to the outlandish stereotype we're all accustomed to. He doesn't rhyme about guns, drugs, or money, or profess to be a killer, baller, or pimp.

But none of this has stifled Shimura's career. His buoyant humor, wickedly clever wit, and remarkable work ethic have powered a 13-year stint that has taken him from humble underground beginnings to last year's "Callin' Out," a funky, upbeat tune that netted the rapper commercial-radio spins, sold-out tours, and various plugs in TV ad campaigns and Hollywood blockbusters.

Born in Japan in 1972, the only child of an Italian American mother and a Japanese father, Shimura moved to Salt Lake City with his mother at age two, following his parents' divorce. Growing up in a Mormon-dominated culture, he knows what it feels like to be "the only person of color in my whole school" and live in a community that he estimates was 98 percent white.

When he moved to Berkeley around 1980, he recalls, "It was like the sun came out of the clouds." All of a sudden, he was surrounded by people of all sorts of ethnicities and social backgrounds. Shimura's first exposure to hip-hop came via the Sugarhill Gang's seminal "Rapper's Delight," which he heard, in true folkloric fashion, not on the radio but on the playground -- kids from his school had memorized its endless rhyming verses and would recite them during recess. "Right there, I was hooked," he says.

By age 12 he'd written his first rhyme, and in ninth grade he formed a rap crew with three other guys. Shimura, whose microphone moniker at that time was Asia Born, was still finding himself. The music helped him craft a cultural identity, but he still had to develop a rap style. After toying with various lyrical approaches, including a horror-inspired technique he calls "insane style," he developed the verbose, melodic, lightning-quick flow that became his calling card.

On his 2003 debut, Later That Day, Lyrics Born crafted a record that served as both a tribute and a postscript to the funk era: "I can't deny what I grew up listening to," Shimura says. Both musically and lyrically impressive, LTD is that rare hip-hop album that actually stands up as an entire album. Its song cycle segues from collective-unconsciousness-raising ("Dream Sequence") to cold-sweat-inducing paranoia ("Bad Dreams") to comedy-laden P-Funkish ruminations on telemarketers ("Cold Call") to politically charged militancy ("Last Trumpet").

Thanks to the album's success -- and a subsequent remix disc, this year's Same !@#$ Different Day -- Lyrics Born has become easily the most prominent Asian American rapper in America, but for some reason, he isn't a cultural icon in the Asian community the way that the popular Filipino turntablist Q-Bert is. Shimura claims that the issue of his being an Asian MC "never came up, until I started doing interviews," although he speaks openly about a lack of Asians on the pop-culture map. From an early age, Shimura says, he detected "this huge void in American public life" where Asians are concerned, even though "we've been in this country for 300 years."

That void made it a challenge for Shimura to grasp exactly what his cultural identity was supposed to be. "We had no validation in terms of role models -- people we look to and be like 'Wow, I wanna be just like him,'" he recalls. "Other than Bruce Lee, it's Arnold from Happy Days, it's Mr. Miyagi, it's Big Trouble in Little China. Fuck that bullshit. That's not who we are. That's where I was coming from."

Shimura changed his stage name from Asia Born to Lyrics Born after realizing that it was "unfair" to expect him to represent all the diverse Asian cultures. "We aren't one simple group that can be lumped together," he says, a little indignantly. "I bump up against that quite often. I treat what I do with so much respect, because I know that even though my stature within the mainstream is very small, I know for at least one person out there, I do fill that void for them. Because it's like I know what that's like, to be that kid."