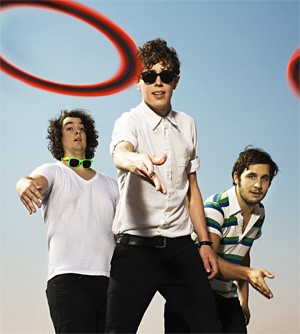 On its debut album, Red Yellow & Blue, the Toronto-based Born Ruffians glides along a mix of mesmerizing shouts and childlike unruliness — sorta like Hot Hot Heat stuck in an elevator with the Go! Team. Frontman Luke LaLonde's guitars swap between jagged Pixies pulses and more lugubrious indie-rock noodling (think Built to Spill). With Lalonde's axe used primarily for accent, the rhythm section takes over — particularly drummer Steven Hamelin, who's capable of hitting the shit out of his kit, but generally adheres to a more spare aesthetic. But the trio is still in the process of forging its own personality, and Red Yellow & Blue's nervy sounds begin to fray over the course of an entire album. Still, it's a promising start, well stocked with hooks and assurance.