Boss of the Flats 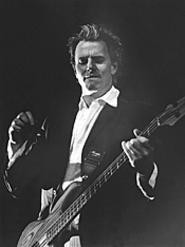 For years, WMMS DJ Kid Leo kicked off the weekend every Friday by playing Bruce Springsteen's "Born to Run." Now, workingman's rock will continue all night. Every Friday from December 26 through the end of February, the Powerhouse Pub (2000 Sycamore Street; 216-861-4982) will become Cleveland's Bruce Springsteen Headquarters, playing music from Springsteen and related New Jersey rockers.

The Powerhouse will redecorate with Jersey memorabilia and play video footage and less-familiar cuts from Springsteen's musical family. In February, the club will give away a guitar autographed by the Boss. Once a month, the Cleveland-based Springsteen-tribute band Stone Pony will play.

Named after the club that helped break Springsteen and later Bon Jovi, Stone Pony covers songs by Springsteen, Southside Johnny, and Steven Van Zandt. The band made a name for itself over the previous 13 years, playing as the Michael Stanley tribute Stagepass, gradually adding Bruce to its repertoire. Now a nine-piece, the group features keyboards and a full horn section.

· Renowned Cleveland artist Derek Hess has launched his own clothing line, Strhess. Hess parlayed local popularity as a designer and promoter into a national following, creating art for bands including Pink Floyd, Pearl Jam, and Thursday. He recently contributed the cover to MTV2's Headbanger's Ball compilation CD. Strhess is a complement to Hess's popular line of T-shirts, hoodies, and hats based on his anatomically detailed, stressed-out characters. Visit www.strhess.com for a closer look.

· Archive-material wellspring Rhino has reissued Devo's The Complete Truth About De-evolution, available now for the first time on DVD. The Akron-spawned synth-art-rock multimedia unit predates MTV, and this comprehensive collection of its output over the past three decades features all 19 of the band's videos, plus footage of early shows, interviews, and new commentary.

· After a five-year hiatus, Cleveland heavy rockers Signal 30 will return to the scene. The band features former WJCU metal DJ Pat Butler on vocals and guitar, in addition to Amps to Eleven drummer/former Shuteye guitarist Steve Callahan and Girth bassist Curt Briscar. Signal 30 will return to Lakewood's Hi-Fi Club on December 13. "The easiest way to describe their sound would be as heavy music with melodic vocals," reads the group's new bio, which compares them to Soundgarden, Life of Agony, and Clutch.

· Following a trial period of inactivity, Cleveland melodic metalers Biastfear have disbanded permanently. Over eight years, the group developed a loyal following, which supported it through two albums of Sevendust-style modern metal: crunchy riffs, big choruses, and plenty of swagger. Members are working on a new group, which they hope to launch in 2004. "We are all still good friends and don't regret a single thing we did or accomplished in this band," the band collectively stated. "However, our hearts are no longer in this music."