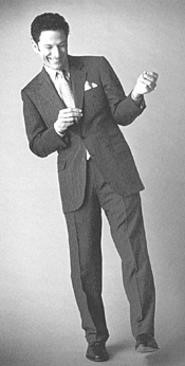 John Pizzarelli doesn't think Rod Stewart is sexy. He doesn't think Mr. "Maggie May" should be singing American standards either. "He made a rotten record," the 44-year-old jazz vocalist and guitarist says. "It's a caricature."

Leave the Great American Songbook to the experts, Pizzarelli says. And while he doesn't claim to be one of them (Pizzarelli's too modest for such proclamations), he does admit to a strong affinity for songs that were composed before he was born. "I've been a big fan of this music for so long," he explains. "I wanted to get it right, when I finally had the chance to do it."

Pizzarelli's latest album, Bossa Nova, is a 13-track tribute to Brazilian pop. Songs by master Antonio Carlos Jobim ("The Girl From Ipanema," "One Note Samba") dominate the set. But the tropical treatment is also given to tunes by George and Ira Gershwin ("Fascinatin' Rhythm") and James Taylor ("Your Smiling Face"). "There was something in the air when this all started," Pizzarelli says. "I just love the sensual nature of the music. There's a simplicity about it, and it all fits together. There's a genius about that simplicity.

"And I love the way the voice works together with the chords and melodies. There are just so many things about it that link together that make it fun to play."

Pizzarelli, the son of jazz guitarist Bucky Pizzarelli, started playing guitar when he was six years old. A dozen years ago, he formed a trio that has tackled the work of such postwar legends as Nat "King" Cole and Frank Sinatra, as well as an assortment of pop music (in 1998, he recorded an album called John Pizzarelli Meets the Beatles). "I still have a jones to try and find songs from the past 15 or 20 years and make a record of them," he explains. "That will probably be the one that gives everybody a heart attack. Now that I have a drummer, it's a whole other thing going on."

But he still has plenty of classic music to explore, he says. Cole Porter, Johnny Mercer, and Duke Ellington (the subject of an upcoming album) are just a few of his musical ancestors he wants to pay tribute to on record. "There are whole songbooks out there we haven't explored," he says. "I want to get back to square one."

And Pizzarelli thinks there's an audience for the real thing. Despite recent lukewarm attempts in the genre by artists like Cyndi Lauper, Bette Midler, and Boz Scaggs. And despite the decent numbers posted by Stewart's pair of standards CDs. "People shouldn't have to hear Rod Stewart singing 'These Foolish Things,'" Pizzarelli says. "The state of all the styles of jazz has never been better. There are people out there buying it. And it's not just our moms and dads.

"We get 20-year-olds coming to our concerts, wearing porkpie hats. They're dressed like Sinatra in the Ring-a-Ding Ding! period." That's a fact, Jack.