Give it up for the stalwart Bettye Lavette. 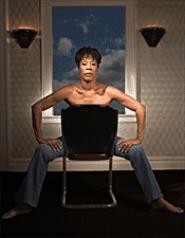 Talking on the phone from her hotel room in Paris, Bettye Lavette is having fun, and she's having it her way. And why shouldn't she? The veteran soul singer is riding high on the buzz generated by her new CD, I've Got My Own Hell to Raise, earning favorable reviews in such high-profile publications as Entertainment Weekly, The New York Times, and Playboy; appearing on Letterman; and performing to enthusiastic packed houses from Seattle to the City of Lights. The attention and acclaim are sweet vindication for a woman who has spent more than 40 years in the music business, working and waiting for the world to recognize her talent.

"This is the first record contract I've had that was based strictly on me, on my live show," Lavette says of her new deal with Anti, home to Tom Waits, Merle Haggard, and Tricky, among others. "They just saw me as somebody who did a good show, and then they didn't inhibit me in choosing the songs."

Produced by singer-songwriter Joe Henry, whose work on Solomon Burke's 2002 comeback LP Don't Give Up on Me gained critical acclaim and helped reinvigorate the legendary soul man's career, Hell to Raise is made up entirely of tunes by female songwriters -- a notion that Lavette first resisted, but then embraced.

Sorting through more than 100 possible songs suggested by Henry, Anti Records President Andy Kaulkin, and others, Lavette chose those on which she could put a personal stamp. "What happens is that I don't think in terms of how something will sound on the radio. Shit, I haven't had a record played on the radio in 30 years," she says with a laugh. "I only think in terms of my show. So when I choose the tunes to record, I choose them because I can see how they'll fit in my show, and I can see myself singing them. I'll think of how I'll be walking, how I'll hold my head, my hands, the whole thing."

Lavette selected works from a disparate group of singer-songwriters and rock, country, and pop artists, including Dolly Parton, Fiona Apple, Joan Armatrading, and Aimee Mann. Though none of the 10 songs represent what would normally be considered soul music, Lavette's raw, throaty rasp transforms them, turning Parton's "Little Sparrow" into an anthem of defiance and Dar Williams' "Joy" into a near-apocalyptic travelogue chronicling her own real-life journey.

Lavette also knew exactly how she wanted to order the tunes she had chosen. "I went to Joe Henry's house before we went to the studio and sat there on his floor and sang the songs to him and said, 'This is how I'm going to sing them,' and I think he was a little surprised," Lavette says.

Ultimately, the only change in her original sequence was moving her version of Sinéad O'Connor's "I Do Not Want What I Haven't Got" from last to first. The song, rendered as a stark, emotionally naked, unaccompanied vocal, has replaced Lavette's early hit "Let Me Down Easy" as her show closer, and she originally wanted to use it to end the CD too. Kaulkin and Henry suggested that the song go first, another move Lavette wasn't sure about.

"I always saw it as closing the show," she says. "I wanted to close the CD with it, but I understand what they were saying, and I think it was a brilliant idea. I was frightened to do it. I was such a punk, you know, because my voice has not sold on records. I would never have done that, honey. I wouldn't have had the nerve to do that for anything, and I had a real fit when they said they were going to do it."

A Detroit native, Lavette had some minor R&B hits in the '60s, but spent the next two decades chasing a follow-up -- recording singles that critics and collectors liked, but the public didn't buy. An album recorded in 1972 for Atlantic was shelved without release, and it took until 1982 for Lavette to put out her first full-length recording, which also sold poorly. Along the way, a six-year stint in the cast of the Broadway show Bubbling Brown Sugar provided a steady paycheck and a chance to further hone her performing skills.

When that ended, Lavette continued to play live and cut occasional singles. When a French record company released her lost Atlantic album in 2000, the singer was primed and ready to be rediscovered. A subsequent live album, issued by a Dutch label, and A Woman Like Me, the disc she made in 2003 with Robert Cray's producer, Dennis Walker, helped further her momentum, setting the stage for a career resurgence that, with her new CD, now seems to be reaching avalanche proportions.

Throughout it all, Lavette has never questioned her own musical choices or identity, so she sees the success of Hell to Raise as simply the logical result of all the necessary external elements -- record company, band, producer, booking agent, material, and the marketplace -- finally coming together at the right time.

"It's a matter of having everything I need at this point," she says. "You know how this shit works, honey. If they had taken any of the other ones I did and put this kind of interest and money into it, maybe it wouldn't have happened like this is happening, but something would have happened."

She has also drawn enduring sustenance from advice given her by her former manager, the late Jim Lewis, a veteran of the big-band era, who urged her to listen to the great pop vocalists and to polish and practice her singing down to the tiniest details of timbre and phrasing.