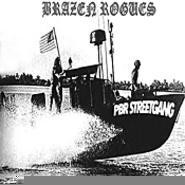 Simultaneously name-checking cheap beer and Apocalypse Now, the Brazen Rogues' PBR Streetgang has the same rough charm as the band's 2003 debut. It's a little overdue, but if you make a record a year when you're writing songs about everyday life in blue-collar Cleveland, you'll wind up penning tunes about changing your socks. Biding their time, the Rogues have cobbled together a collection of gritty ditties about dating pierced punk girls, listening to Johnny Cash, drinking, starting circle pits, and drinking some more.

Singer/guitarist Vics and drummer/piper Rick are firemen, and Vics barks out an anthem to their brothers in "Brazen Blaze," rubbing his scars, thanking St. Florian, and playing his guitar like a badly beaten bagpipe. Oi! is one of the purest remaining forms of punk, and the band takes it even lower than street level, setting a new standard for rough shout-alongs in "This One's for You." The tune may be gruff, but it also boasts a chorus with the kind of monster hook that the Cleveland Fire Department could use to fish a sinking car out of the Cuyahoga.