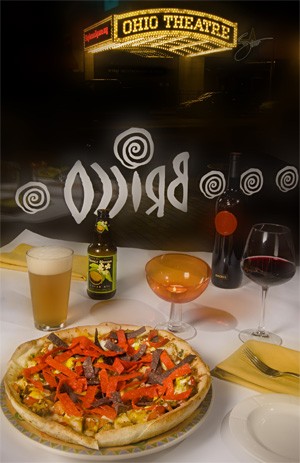 Somewhere behind Bricco's curtains lies a good restaurant. Sadly, though, sketchy service and the occasional culinary miscue obscured the sightlines during a couple of recent visits.

That's particularly regrettable, considering the life this project has breathed into the moribund area around Playhouse Square. Settled in long-vacant space inside the Hanna Building, almost directly across the street from the State and Ohio Theatres, the handsomely appointed Bricco is a major boon for hungry theater, concert, and sports fans, as well as a weekday draw for office workers. Late-night hours — stretching until 1 a.m. on Friday and Saturday — make it an especially appealing venue for post-event noshing. And $6 valet parking — which covers both dinner and a show — provides the type of convenience and security that suburbanites crave.

It's a great concept, and no wonder. Former wine salesman and longtime restaurateur David Glenny launched the original Bricco in downtown Akron in 2003, with an easygoing blend of familiar foods (pizzas, pastas, salads, and noshes), a casual vibe, and artful surroundings. He's gone the same route for his northern outpost, which opened in February. In the process, he's transformed a cavernous, high-ceilinged space into a series of intimate dining areas, complete with warm wall colors, trendy light fixtures, and faux-marble finishes.

A casually elegant barroom serves as the restaurant's core, featuring 34 specialty martinis ($7.50 to $9.50); more than 200 wines by the bottle, half-bottle, and glass; and an international lineup of nearly 100 bottled beers — everything from Bud Light and Blue Moon to Grimbergen Blonde (Belgium) and Monty Python's Holy Grail Ale (England). Prices are right too: The Sierra Nevada Pale Ale that goes for $4 at area taprooms, for instance, is tagged at just $3.25 here, and the Rogue Dead Guy Ale we often see at $4.50 is Bricco-priced at a mere $3.75.

Still, we would have loved to see a few tasting notes on the beer list — or at least servers who knew their Hoegaarden from a hole in the ground. But no such luck.

Nor was the brew-based ignorance the only flub. On a Friday evening, further irritations included a 20-minute wait for the aforementioned brewskis, which arrived with glassware rimmed in someone else's lipstick, brought by a server who then neglected to put bread on the table, inform us of the day's dinner specials, or ask for a dessert order before plunking down our check.

Service remained equally amateurish during a lunch visit the following week. On the plus side, we did get a breadbasket this time (sort of an anticlimax, actually, with its three slim slices of ho-hum white). But our server couldn't tell us what seasonings were in the flavored butter. And when we made a point of asking her about sweet endings — as she was handing us the bill, no less — she looked positively stunned. "I don't know. Nobody ever orders dessert at lunch!" If true, this is a serious miscalculation, since the raspberry-and-macadamia-nut bread pudding, made with a base of flaky croissants, is a showstopper at any time of day.

In fact, the moderately priced food is Bricco's strong suit. Particularly pleasing: a starter of two plush pan-seared scallops, wrapped in lean bacon and skewered on a sprig of rosemary. Also: an entrée of rotini (not rotelle, as touted on the menu), tossed with olive oil and an abundance of kalamata olives, pine nuts, feta cubes, baby spinach, and ever-so-slightly roasted tomatoes. For a $3 upcharge, protein-conscious types can toss in a few cubes of grilled chicken breast.

As for the pizzas, Bricco's pies are good — thin-crusted, generously topped 12-inchers, in zesty-sounding combos like blackened chicken, red pepper, and barbecue sauce; ham, salami, pancetta, and black olives; and mushrooms, artichoke hearts, roasted red pepper, and Boursin, with a hint of mellow marinara. Tasty stuff, although somehow not quite as savory as their descriptions might suggest.

Other worthwhile choices included the tender crab-cake sandwich, enhanced by a topping of sweet corn, asparagus, and arugula "salad," and served with freshly cut French fries; and a spicy spin on fried calamari, goosed with chorizo and hot banana peppers.

Beware, however, of the "baby" spinach salad, which clearly had led an abused life. How else explain the bruised, frayed, and rotting leaves that composed at least 25 percent of the greenery? We picked them out as best we could, then pointed out the unappetizing mess to our server. Her response was to giggle and then whisk away the uneaten remains — no apology, no "I'll tell the chef," and certainly no "Let me take that off your bill."

We might tolerate such amateurish antics at a suburban diner. But from a downtown wannabe hot spot? It doesn't play well at all.