If Conor Oberst ever overcomes that pretentious disdain, he'll rule the world. 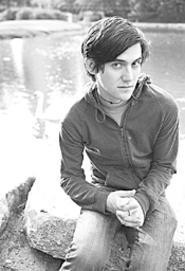 In the great Bright Eyes biopic -- Gifted, or The Ego Is at Full Boil, Keep Your Head Outta Your Ass -- that will sweep the Oscars in 2015, the role of Conor Oberst will be masterfully portrayed by Leonardo DiCaprio: spry, wiry, pint-sized, bright-eyed, and supremely talented -- yet vain, mercurial, insolent, inelegant, intermittently insufferable. A lovable yet punchable prima donna at war with the unreasonable expectations born of his own vast potential.

Also, occasionally, a douchebag. This man needs a hug -- and a kick in the taco.

Compare him to Bob Dylan again, and we will personally put your butt in a sling. We are not using a literary device. It's unclear where this journalistic tripe -- parroted ad nauseam in The New Yorker, Rolling Stone, Spin, The New York Times, etc. -- began, or why. Perhaps it's Oberst's verbosity, birthing songs that, on the page, rival apartment leases for size and density. Perhaps it's his newfound political fervor, locking arms on the Bush-bashing Vote for Change concert circuit with the likes of Michael Stipe and Bruce Springsteen. Or perhaps its his recent dual-album release -- the old Guns N' Roses trick -- pairing the spare, singer-songwriterly I'm Wide Awake, It's Morning with the wanky "Conor Goes Electric" experimentation of Digital Ash in a Digital Urn.

Or -- as indicated by a show in Berkeley, California, earlier this year -- it's just because Conor has grown increasingly surly, and his fans increasingly cloying.

"I'm in love with you, Conor!" screamed a lass who exemplified The O.C. demographic.

"This song's called 'I Must Belong Somewhere,'" Conor mumbled onstage.

There's a fundamental disconnect here. From the moment the house lights fell, hoots of unmitigated lust filled the Berkeley Community Theatre, reducing a monstrous (and monstrously conflicted) songwriting talent to a Rick Springfield doofus heartthrob. It doesn't make sense. Most rock stars who inspire such sex-crazed devotion are either libidinous Smoove B types (Usher), harmless boy-next-door cutie pies (the Monkees), or "Bad Boys" (Mötley Crüe). Conor meets none of these criteria: His onstage persona is deliberately somber, distracted, uncertain, vaguely hostile. He is clearly not enjoying himself -- and certainly not enjoying our company.

Ladies, he's a world-class brooder. What's the attraction? Clearly, you are dreaming of neither long romantic walks on the beach nor degrading 90-second tour-bus assaults. Perhaps you'd like to carry him home in your arms, wrap him in a coupla afghans, spoon-feed him clam chowder, and slowly nurse him back to health and/or a positive, sunny demeanor.

"Leave the old town drunk on his wooden stool/Leave the autumn leaves in the swimming pool/Leave the poor black child in his crumbling school today/Leave the novelist in his daydream tune/Leave the scientist in his Rubik's cube/Let true genius in the padded room remain."

Boo-yah. The next verse has a line about cauliflower that somehow doesn't sound utterly ridiculous. No one's touching this dude lyrically in the Pitchfork Pantheon, but that "poor black child" line, a touch too Sally Struthers, underscores the way his leftist fervor and melodrama are transforming him into a hard-headed, heavy-handed whiner.

For example, the Berkeley show's stage banter -- a few thank-you grunts and a terse acknowledgment as the giddy crowd sang "Happy Birthday" (he turned 25) -- paled in comparison to his well-publicized Dallas tirade a few shows earlier: "I don't know if you know this, but I hate your [expletive] state," he howled, according to the demure Dallas Morning News. "I'd put a [expletive] gun to my head before I'd live in your state . . . If you came to this show tonight, you're not a normal Texan. If you were a normal Texan, you'd probably be roping steers and raping Indians."

Boo-yah. Nice stereotyping, Tex. In Berkeley, evidently, Conor felt far more in his political element, introducing his climactic protest song "When the President Talks to God" by noting that it's a tough sell in some parts of the country, but not here. He is mistaken. It's a tough sell here, too, because the tune is awful, slinging ham-handed 20-pound poetry ("Does he ask to rape our women's rights/And send poor farm kids off to die?") as Conor's voice attempts to grow in fury and intensity, but instead gets only more shrill and histrionic. "Does the president smell his own bullshit/When the president talks to God?" goes the shrieking climax.

Look. George W. is not welcome in this writer's official fantasy-baseball league, but neither are emotionally tone-deaf anger-balladeers, whose outlandish caricatures only fortify Bush's supporters and make fence-sitters wince. Next time you're playin' foosball with Springsteen, ask the Boss, and he'll tell ya: The most resonant political anthems are 250 parts eloquence and compassion to one part blind, seething rage.

This wankery is especially repellent in light of Oberst's monster talent -- and the monster perch from which he flaunts it. Watching a six-piece band of people, all apparently under 30, command a stage primarily reserved for the Neil Youngs and David Bowies of the world is tremendously inspiring, even if they sometimes rely overmuch on country-rock clichés (oh, those train songs) and trumpet solos. And the show's best tunes mingled epic, "We Are the World"-style anthems ("Landlocked Blues") with quiet moments of romantic devastation ("Lua"). The possibilities for this kid are unreal, as long as he avoids political screeds and self- (not to mention crowd-) loathing antics.

The Michael Moores and smitten coeds of the world don't understand your true potential, Conor. Come home with us instead. We'll warm you up, get some soup in you, turn that frown upside . . . Ah, now we're starting to see the appeal. In the great Bright Eyes biopic -- Gifted, or The Ego Is at Full Boil, Keep Your Head Outta Your Ass -- that will sweep the Oscars in 2015, the role of Conor Oberst will be masterfully portrayed by Leonardo DiCaprio: spry, wiry, pint-sized, bright-eyed, and supremely talented -- yet vain, mercurial, insolent, inelegant, intermittently insufferable. A lovable yet punchable prima donna at war with the unreasonable expectations born of his own vast potential.