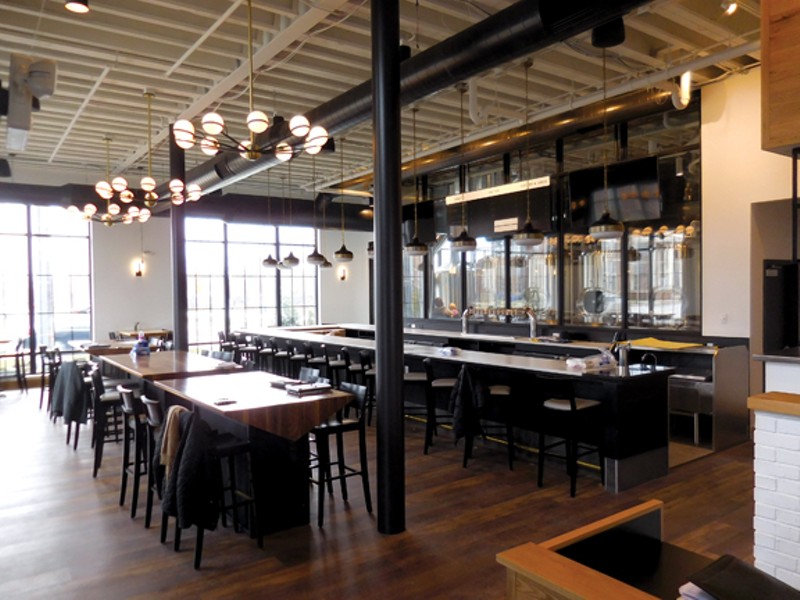 If you happen to be one of the 30,000 or so daily commuters who make their way through the intersection of Erie and Vine in downtown Willoughby, you couldn't help but watch as a substantial brick building rose from the ground over the past year. At night the view becomes even more dramatic: a shimmering white-brick-and-glass structure with a battlement of gas torches visible from an upper-level terrace.

"The building is literally a beacon, especially when it's lit up at night," says GM Michael Bertolone. "You'll be able to see right inside and see people having fun upstairs and down."

Talk to owners TJ Reagan and Chris Frate for any length of time and the word "transparency" is bound to pop up. There's the literal meaning, exemplified by the glassy walls of both the building and the half-million dollar brewhouse. And then there's the more allegorical intent.

"When you walk in, you're greeted by the sounds, the sights, and the smells of the open kitchen," Reagan says. "We believe that the old days of preparing food behind a wall are over. We think people want to see what's going on."

For the past two years, Reagan has been planning his splashy reentry into the Willoughby community. Nearly 20 years ago, he opened the award-winning Willoughby Brewing Co., which he operated until 2011, when he sold the business.

"I don't know if in the entire country there's a guy that did two separately owned breweries less than 500 yards from each other," Reagan says while pointing to the backside of his former baby. "It's in my blood. I really missed the action."

Reagan knows that there's more than enough room for two breweries in this suburban town, especially given Brim's perch between I-90 and Route 2. The 8,000-square-foot, two-level building might be new, but it feels like a century-old warehouse, thanks to expansive multi-pane windows, tall ceilings and exposed rafters. A regularly passing freight train helps sell the illusion.

Behind the bar, journeyman brewer Larry Hazen works in a glassy two-level, 10-barrel brewhouse. The former Willoughby Brewing, Crooked River and Stone Brewing alum is preparing an opening lineup of four proprietary beers that will join a roster of local, regional and national craft drafts.

"I'm trying to not let style guidelines guide me," he says. "We'll start with a pale ale and a stout, but after that I'm just going to be a kid in Candyland. I'm doing a Belgian-style peach and a dry-hopped Belgian wheat with lemongrass and New Zealand hops."

There's room for 100 guests on the main floor and another 100 guests on an airy second floor, accessible by an open stairwell or elevator. In place of the trusty front or back patio, Brim sports an elevated terrace with 270-degree views of the landscape. Downstairs features a large bar, that open kitchen and plenty of seating.

Chef Nick Frate, who will split his time between Brim and his family's other business, Pub Frato in Concord, will preside over an expansive, eclectic menu that veers from Montreal-style poutine to Korean bulgogi. In between there's avocado toast, Frito pie, tuna poke nachos, grilled ribeye, bangers and mash, grilled cheese and a burger. Starters are in the $8 to $14 range, salads and grain bowls in the $9 to $11 range, and mains largely in the $12 to $19 range.

"The space definitely paints a certain picture, but at the same time it's a brewery; you're here to have fun," Bertolone, a former Zack Bruell staffer, says.

One can sense that Reagan is absolutely giddy for the chance to have another bite at the brewery apple, and he's spent his down time pouring over ways to improve on his previous successes. The results are evident in the layout, design and function of the property, which manages to be simultaneously timeless and contemporary.

"We really thought about how do we best weave ourselves into the community," he says. "We believe that we can provide the same culinary experience, beverage experience and service experience that you get in a downtown market but in the suburbs.

"We're itching to get the beer in the pints and the food on the plates."