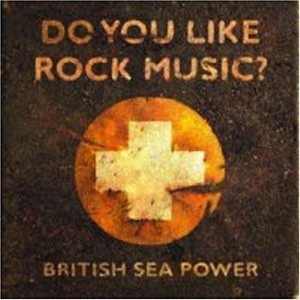 On their 2003 debut, The Decline of British Sea Power, these U.K. indie-rockers laid buzz-saw guitars on top of an expansive, psych-tinged background. Their 2005 follow-up, Open Season, sacrificed some of that steely bite for strings and swooning textures. Without jagged guitar slashes propelling them, the songs frequently sank beneath the weight of their chilly new-wave swirl and shimmer. Do You Like Rock Music? doesn't quite answer with a deafening yes, but the album's grit and glamour are better calibrated this time around. Opener "All in It" features a marching choir of voices, "Lights Out for Darker Skies"' nervy jangle spins off into dreamland, and the gauzy, arena-sized "Waving Flags" sounds positively Spiritualized. And that's just the first third of the CD. Do You Like Rock Music? sags a bit in the middle, but regroups in time for the eight-minute finale, "We Close Our Eyes," which reaches an atmospheric intensity that Coldplay's Chris Martin has only read about.