Tour violence and infighting take down a legendary band. 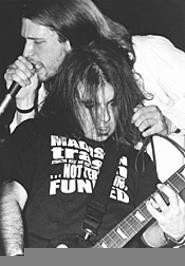 Integrity, the Cleveland band acclaimed for its pioneering blend of metal and hardcore, has broken up amid a flurry of fists and dissension among band members. The split ends a 15-year run that included eight albums made by a revolving-door lineup.

The rift began at a December 18 show in Portland, Oregon, where a pack of anti-racist skinheads attacked drummer Chubbz onstage, splitting his head open. The attack was apparently prompted by Chubbz's membership in One Life Crew, a hard-core outfit whose outspoken conservative ideals have earned its members a racist reputation (a label denied by Chubbz).

Integrity played one more show before scrapping the tour. Upon its return to Cleveland, the group evaporated, abandoning plans for a tour of Australia and an opening slot for Six Feet Under. With the breakup came claims from Chubbz that frontman Dwid pocketed money from the last tour. (The singer denies the allegation.)

With such seminal releases as 1990's Those Who Fear Tomorrow, Integrity helped establish the modern form of hardcore-heavy metal crossover known as metalcore. Over the years, Dwid has responded to dissension with wholesale lineup changes.

"I've taken a couple hours and done the math," he says. "There's been like 60 people in the band. And that was a couple years ago. My band's a prep school to be in Cleveland rock and roll."

In 2001, he retired the Integrity name, throwing farewell parties in Cleveland and Akron, though the band continued gigging and touring. The return seemed a clear attempt to cash in on the exploding metal market. But this time, rather than simply retooling Integrity's lineup again and heading on tour, Dwid plans to return to Europe, where he will continue playing with his hardcore band Sledgehammer, which features European HC all-stars.

"I'm kind of self-destructive with the band," Dwid says of his decision to disband Integrity. "I don't think this band is something we should cash in on. I have my other band, and that's fun. It should be about playing rock and roll and having a good time."

"To us, it's a bum-out," says Jake Bannon, co-owner of Deathwish Inc., the Massachusetts label that issued Integrity's latest album, To Die For. "We saw the band on a really powerful second wind. We wanted to see them be all they could be. And that's not going to happen."

· Drummer Eric Vogt has amicably parted with Viva Caramel in order to finish school. He's been replaced by Jeff Ottenbacher, who cut his teeth in progressively rocking bands such as Lives of Saints and Proletarian Art Threat, after learning his chops in local hardcore acts. After a January 10 show at the Grog Shop, the band plans to take a hiatus, write material, and work on a new set list, cutting old songs and working in newer ones.